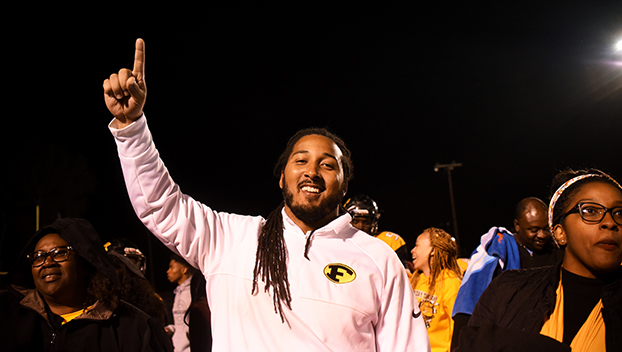 In his first year as head coach, Ferriday High School’s Stanley Smith led the Trojans to an appearance in the LHSAA Class 2A semifinals for the first time since 1995. He would go on to win the State championship with the Trojans as well (File Photo | The Natchez Democrat)

NATCHEZ — Alongside The Natchez Democrat’s 2017 All-Metro Coach of the Year Dee Faircloth of Vidalia High School, a host of other area coaches made a statement this year.

Ferriday High School’s Stanley Smith — in his first year as head coach — returned to his alma mater to lead the Trojans just shy of an appearance in the LHSAA Class 2A State Championship game.

Ferriday (11-3) fell short in its semifinal matchup against St. Helena on Dec. 1 — losing on a touchdown pass on the last play of the game, 12-6.

Despite not fulfilling their hopes at winning a state title, the Trojans won the District 2-2A title after defeating two Class 5A schools while also shutting out Class 4A Franklin Parish, 58-0.

Smith played middle linebacker for Ferriday, graduating in 2001. His first year on the job ended with seniors Dantrieze Scott and Dare Rosenthal signing their National Letters of Intent to Louisiana State University. The duo made their commitments official on early signing day last Wednesday, as a host of other senior Trojans are expected to sign football scholarships this coming February on National Signing Day.

After a rough start to the season, Trinity Episcopal’s Graham Roberts — in his second year as head coach — led the Saints to the MAIS Class A State Championship Game on Nov. 16.

Plagued with injuries throughout the season, Roberts boosted his team to an outright District 3-A title for the first time in three years.

After playing high school football at Vidalia High, Roberts fulfilled a lifetime dream this year by playing for a state championship.

Natchez High School head football coach Roy Rigsby ended his first season at the helm with just one win, but this year he did much more.

Rigsby led the Bulldogs (6-5) this year to their first winning season since 2012.

Rigsby had the backing of 22 Natchez seniors, including three-year starting quarterback Chris Scott who signed his early National Letter of Intent to East Mississippi Community College this past Wednesday.