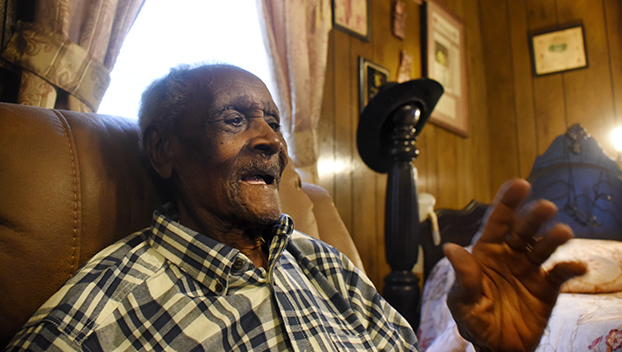 Jessie Winston reminisces about his life and what Natchez was like when he was younger while talking about his 107th birthday today at his home on East Franklin Street in Natchez. (Nicole Hester / The Natchez Democrat)

NATCHEZ — In 1910, The University of Southern Mississippi was founded, the Wright brothers commissioned the first known commercial flight, and a Natchez icon was born on Christmas day.

Jessie Winston has spent all those years right here in his home city, and he never once considered leaving.

The living room walls of Winston’s Franklin Street house are filled with accolades and marquee moments in his life, which he loves to share. Some of these include a letter he received last year from former U.S. President Barack Obama, an award from the City of Natchez for his more than 70 years of service as a barber (he still cut hair on occasion up until the age of 105), and photos with local politicians such as Natchez Mayor Darryl Grennell.

Only a broken hip that Winston suffered earlier this year could slow him down: before that he was still getting around just fine.

Winston’s daughter, Helen Winston, said her father was still driving up until just a few years ago.

“We had to get the doctor to tell him to stop driving, because at 101, he was still driving,” Helen Winston said. “He got (upset) when we took the keys.”

But she said her father listened to his beloved doctor, Dr. Barry Tillman, who has cared many years for Jessie Winston.

So, what does someone get a person for Christmas who has been on this Earth for so long?

Rather disinterested in talking about the present, Winston began to revisit his extensive past.

He recalled his childhood, when Natchez was nothing but gravel streets and dirt roads. Back then, Winston said, he would see policemen walking detained subjects back to the jail, since the advent of automobiles had yet to come.

“They would put that pistol up and say, ‘Get up ahead of me, and don’t start nothing funny,’” Winston said, laughing at the antiquated thought. “There wasn’t no cars, you know? Policemen had to walk to the jail — don’t care how many miles it was, they had to walk it.”

He remembers the days when the “fire truck” was pulled by horses, when streetcars rolled through the streets of downtown Natchez.

But he also remembers the tragedies that befell the city, especially the Rhythm Nightclub Fire of 1940.

Winston, 29 at the time, said he visited the nightclub to grab a beer earlier that very day before the fire cost 209 people their lives.

“I was never in any danger, but I was there that day,” Winston said.

Today, Helen Winston plans to drive her father around and probably spend the holiday with other relatives who live in town.

And while there, odds are the now 107-year-old Jessie Winston might tell a story or two.

“I’ve seen a lot of things in my life,” Winston said.