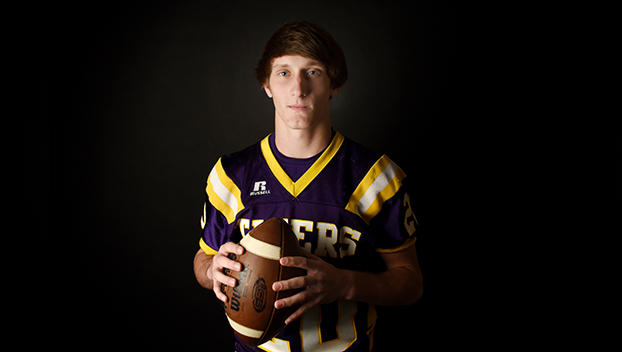 Centreville Academy senior running back Stone Reynolds was named the 2017 All-Metro Football Player of the Year. Reynolds led his team to an appearance in the MAIS Class AA semifinals and lost just one fumble on the year. (Nicole Hester / The Natchez Democrat)

In the Tigers’ MAIS Class AA quarterfinal win over Brookhaven Academy, Reynolds was falling to the ground as a Cougar defender knocked the ball loose with his helmet.

“It was close,” Reynolds said. “A lot of people thought I was down. At the last second, it just popped out. It was really close.”

Though officials called Reynolds’ fluke mishap a fumble — in which Brookhaven Academy recovered — it luckily didn’t have much of an effect on the game.

Reynolds ended the win with 258 yards on 28 carries and three touchdowns — just one of many stellar performances he had this past season.

For his efforts, Reynolds was named The Natchez Democrat’s 2017 Football All-Metro Player of the Year.

After injuring his ankle in the first quarter of Centreville’s first game of the year, Reynolds accumulated a total 1,296 yards on 144 carries and 25 touchdowns. He was also named the MAIS District 4-AA All-District MVP and as an MAIS All-Star Selection.

Reynolds missed the remainder of Centreville’s first game after his injury as well as the following two games.

Getting back on the field to lead his team, Tiger offensive coordinator Will McNabb said, was never in question for Reynolds.

“It was rough on him and the team. We were really leaning upon him,” McNabb said. “It was a morale killing not having him out there for those two games. He did fall a little behind, but he never looked back once he got his chance to shine.

“The way we relied on him, I think it means a lot to Stone. He touched the ball around 30 times a game, but he was just as strong on the 30th carry as he was on the first.”

And of course when you’re able to hold onto the ball, that helps, too.

“He’s not a very big kid, so he had to run with some meanness about him,” McNabb said. “But not really losing a fumble, that was one reason we had so much confidence in him. We just felt like we had to give it to Stone, especially once we got close to the goal line.”

Reynolds’ best game of the year came in the Tigers’ regular season win over Brookhaven Academy as he rushed for 257 yards on 26 carries and five touchdowns.

Both times Centreville defeated the Cougars, Reynolds said, were some of his favorite moments of the season.

Despite the one blemish to his otherwise rather impressive season, Reynolds will always have a story to tell.

“I blame that on his Momma,” Reynolds’ father James Reynolds said. “Her and I were watching his highlight tape that Thursday or something and she said ‘You know, Stone just runs so hard and the ball has never got away from him.’

Sure enough, the superstition came true.

“I didn’t really realize that I had never fumbled, but she just had to say it,” Stone Reynolds said with a smile.