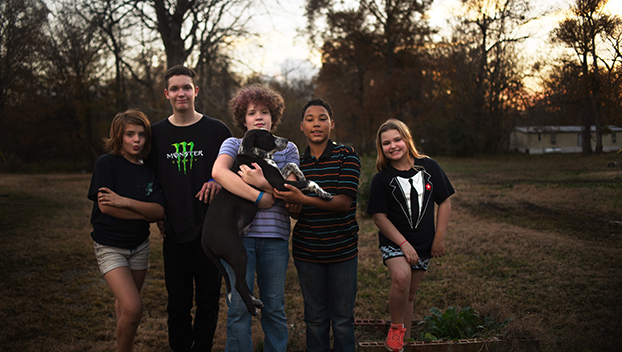 VIDALIA — Jordan is a little black and white dog whose owner changes from week to week.

Unbeknownst to Jordan, he is at the center of a great controversy.

Jordan began as 10-year-old Otis Frazier’s puppy back in the summer but in November, he and Christina Godbold, 13, worked out a deal. Neither of the neighbors could take care of the dog full time, so why not share?

One week, Jordan is Godbold’s dog. The dog sleeps at Godbold’s house and receives meals from the Godbold family.

The next week, Jordan moves to Frazier’s house just a few blocks down the street.

No matter who he belongs to that week, Frazier spends most of his time with the same group of friends.

When The Dart landed on Belle Grove Circle in Vidalia just days before Christmas, five children peddled their bikes down to Frazier’s house.

Chloe Dees, 10, Sierra Enright, 10, and Aaron Bradshaw, 15, ride their bikes down to Frazier’s residence often, they said, because of the trails that run behind his house.

The friends have been known one another for years; the small suburb on Belle Grove holds a tight-knit community. It would be difficult, the friends said, not to know one another since they live so close.

During Christmas break, the friends get even more time to see one another.

Frazier was playing with a white plastic Christmas tree when Godbold showed up with Jordan.

“I have him this week,” she said proudly. “I won him in the trial.”

In early December, Frazier, Goldbold and her brother, Aaron Bradshaw held “court” to see who would get possession of Jordan.

“Aaron was the complainant,” Frazier said. “She was the defendant. I was the judge.”

It was Goldbold’s week to keep Jordan, but Bradshaw wanted custody for himself.

“He wanted to turn (Jordan) into a guard dog,” Goldbold said. “He is not a guard dog.”

Frazier demanded that Goldbold and Bradshaw bring two stuffed animals to the courtroom.

“Whoever took care of their stuffed animal better won the dog,” Frazier said.

Frazier said after much deliberation, he chose Goldbold as the winner.

“She took care of her stuffed animal better,” Frazier said.

So for the next eight and a half days, Jordan belongs to Goldbold.

Who owns Jordan on what week does not really matter, Frazier said. They are always together anyway.