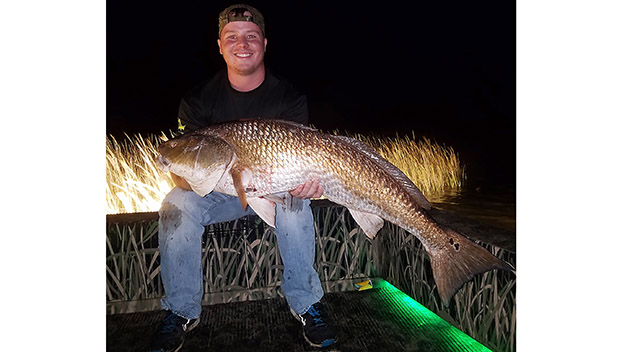 NATCHEZ — As soon Jeremy Cable saw his world record-setting redfish, he knew exactly what it was.

“I saw it and it was so big you couldn’t mistake what it was,” Cable said. “It was just one of those moments — you knew it wasn’t normal.”

Cable — a 2011 graduate of Trinity Episcopal — runs his own charter fishing business in Cocodrie, La., and was testing the waters through a canal with a few friends on the night of Nov. 1 when he spotted the 29.55 pound beast.

But instead of using a traditional rod and reel, Cable shot the fish with a bow and arrow. Now, Cable has many others hooked on the idea of the unique way to capture fish.

The fish — which required four direct hits off five arrows — continued to shock Cable even after he initially saw its massive size.

Cable’s redfish — a whopping 41.89 inches — was officially measured and weighed by the Louisiana Department of Wildlife and Fisheries the day after he pulled it into his boat. It was then verified by the Bowfishing Association of America as the largest to ever be shot in the world.

“We had no idea it would set records,” Cable said. “My buddies and I started to do some research and then we realized maybe it would be a state record.

“I still get congratulations all the time. The first thing people tell me when they see me is that they heard I broke a world record.”

There was a brief moment, however, when Cable didn’t think the fish was going to be secured. Cable said at one point, the fish swam underneath his boat and two arrows pulled out.

“We were in panic mode and there were lines everywhere,” he said. “There was heartbreak for a moment.”

“It was an adrenaline rush,” he said. “It’s a competitive thing. You’ve got people you have to tell immediately. I have three brothers and they all told me they were so proud of me, but also that they hated me.”

Originally from the New Orleans area, Cable grew up bowfishing and rediscovered the practice after college.

“I just got to doing it more, and got the idea to start a business since we are so close to the gulf,” he said. “I’ve been running charters in the past few months and it’s going great. The area is really suiting our needs.”

And for all the late nights on the water to come, Cable said he won’t allow himself to slack off.

“I don’t plan on that being the biggest one I ever shoot,” he said. “There are plenty of other people trying to break the record now, too. I hope it happens tonight.”

Cable also hopes the bowfishing industry continues to grow. Currently, the LDWF only counts records for fish caught on a rod and reel.

“Hopefully that will change,” Cable said.