Broadmoor Utilities water out on Christmas for almost 24 hours 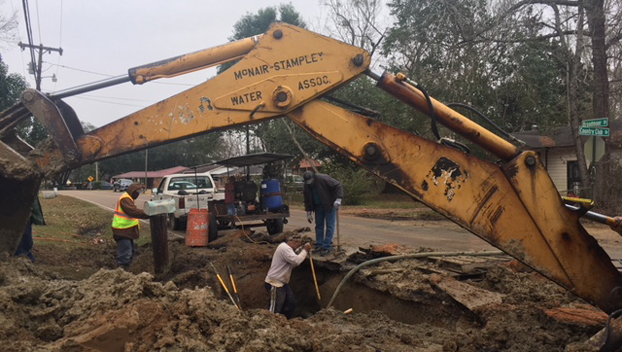 NATCHEZ — A burst main water line in the Broadmoor community stopped water flow to many of the community’s 1,400 residents on Christmas Day.

Water service to many residents came to a halt at approximately 2 p.m. Monday and remained out of service until approximately noon Tuesday, resident Linda Montgomery said.

Monroe Sago, a member of the Broadmoor Utilities Inc. board, said workers had been on scene repairing the break all night.

The pipeline was laid when Broadmoor Drive was only a single lane, Sago said. When the road was widened to accommodate for two-way traffic, asphalt was poured over the waterline.

Sedrick Smith used a backhoe to peel back the asphalt so workers could access the line.

Don King, another board member for the utilities company, helped replace a 7-foot stretch of degraded pipeline with a new PVC pipe.

“It’s just a matter of getting to it,” Smith said. “We’re just digging it up.”

The break occurred at the intersection of Broadmoor Drive and Country Club Drive, just inside Broadmoor Utilities’ area of coverage.

That main line, Sago said, feeds water to the rest of Broadmoor, meaning the majority of the community lost water when the line broke.

This outage is the third time since June that Broadmoor residents have lost water.

Broadmoor residents have been under a boil-water notice since Nov. 3.

“It’s a private association, so there’s not anything I can do,” Gray said. “I try to find out what’s going on so I have an answer for them.”

Gray was out on Broadmoor Drive Tuesday morning in the cold rain with the construction workers.

“When you have pipes this old, this happens,” Gray said. “You have to have a lot of patience.”

In the Adams County Water Association system, Gray said one portion of the service area could be shut off while the rest remains active.

“I guess they can’t do that here,” Gray said.

The pipeline was finished by midday Tuesday, but Sago said the road would take much longer to repair.