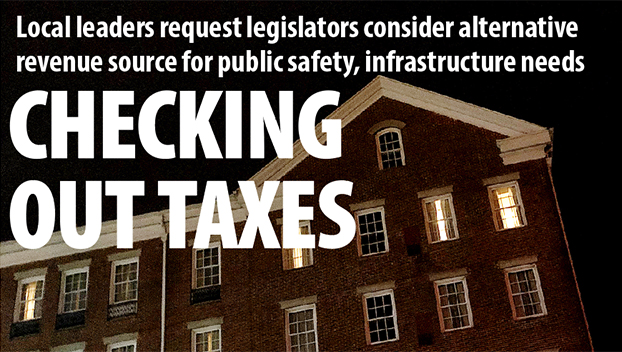 NATCHEZ — A hotel tax increase, visitor’s center upgrades, infrastructure needs and addressing local poverty were some of the topics discussed by local officials and state legislators Friday morning in Natchez.

Russ led the meeting with an agenda for the discussion, which he said would concern items that all city and county officials could agree on.

“These are the issues that we felt like could get full consensus on and have them be priorities to move forward from a legislative standpoint,” Russ said.

One of the most-discussed items concerned the hope by officials for an additional lodging tax to create an additional revenue stream for tourism-related needs.

Expounding, Grennell said those monies could be applied to public safety and infrastructure, for example.

“The justification of this additional lodging tax is to enhance protection, to enhance infrastructure as it relates to visitors who come into our community,” Grennell said.

Grennell said the increase would not impact city residents since non-residents primarily use lodging services.

The city currently collects a $2 “heads on beds” tax for every room night booked at city hotels or bed and breakfasts.

Dearing told Grennell he would need a resolution from the board of aldermen, to which Grennell responded that he believed the board would be unanimous on that front.

Natchez-Adams School District board member Phillip West posed the question whether the tax hike would require a referendum.

Both Dearing and Johnson said while it might not be legally required, passing the tax through the Legislature would be difficult without one. Johnson said city leaders should be careful to ensure they have support from legislators before counting their chickens.

“I don’t know why — if local officials are willing to raise the tax themselves at the local level — why we care what they want to do with their money,” Johnson said. “But there are people who want to micromanage what cities and counties do with their money.”

Johnson said he personally agreed that using money to bolster law enforcement was a good idea.

One of Russ’ first agenda items Friday concerned the need to upgrade the Natchez Visitor Center, which he said is overdue.

Russ said the city would be requesting both a recurring funding structure as well as a one-time allocation of between $1.2 and $1.6 million to upgrade the center.

Russ said the welcome center is one of only two in Mississippi that is not owned by the state or the Mississippi Department of Transportation, trying to make the case that the government has a fiduciary duty to contribute funding.

The recurring funding, Russ said, is also warranted because the center serves a statewide function.

District Supervisor 4 Supervisor Ricky Gray went off the cuff to address a topic he sees as instrumental to solving many of the county’s issues — poverty.

The supervisor asked legislators to help find a way to alleviate poverty, which he said would in turn lead to prosperity in other facets.

Johnson responded that he understood Gray’s concerns, but said poverty is a statewide issue. Johnson also said the city should be able to figure out a way to reverse its declining economy because of its position along the Mississippi River.

“One of the most profitable areas you could have is along the river,” Johnson said. “It ought to be workable.”

The potential of bringing an interstate highway to Natchez — another key issue officials discussed — is federal in nature, but still requires the support of state legislators and agencies, Russ said.

With multiple meetings looming concerning the potential interstate — including a meeting with Mississippi Transportation Commissioner Tom King and a gathering two weeks later in Washington D.C. with congressional delegates — Russ said the time to begin moving forward is now.

“This is going to be a long, long play … and we’ve got to start somewhere to get it done,” he said.

At the meeting’s conclusion, Grennell asked for legislators’ opinions on I-14.

Johnson said while he is fully supportive of adding the interstate, he had concerns about the feasibility of funding the project.

“I can tell you that it makes all the economic development sense in the world … but it’s still going to boil down to if the state has money to pay for it,” Johnson said.

Russ said the main goal for 2018 — irrespective of funding — is to receive a congressional designation for the project along U.S. 84, from the Mississippi River bridge all the way to Laurel.