YMCA looks to build on local opportunities, activities in 2018 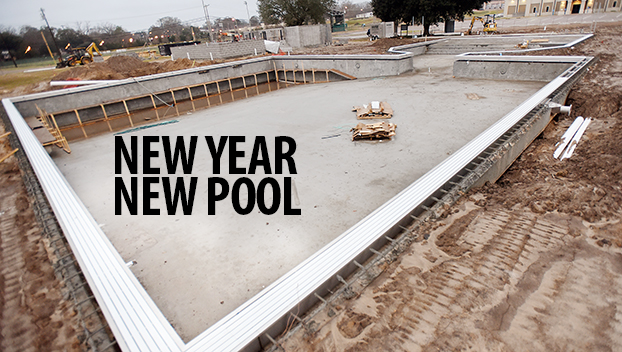 The new community swimming pool currently under construction is expected to be open in May 2018 under the management of the YMCA. (Ben Hillyer | The Natchez Democrat)

After moving to Natchez in November 2016, YCMA Director Alice Agner is hopeful the new year will be filled with expanding opportunities for youth recreation in the area.

Following a term agreement finalization with the Adams County Board of Supervisors and Natchez Board of Alderman in early November of this year, Agner said she is pleased to know that everyone now has set responsibilities.

The boards voted to allow the YMCA oversee a majority og recreation in the city.

“It’s hard to do anything when things are not in place. We are happy to have a finalized agreement,” she said. “We have a role here now and we know we are here to stay. It makes it a lot easier to do, and I think everybody feels better than we finally got it ironed out.”

The city swimming pool is one of the biggest projects Agner and the recreation committee received supervision over, set to be completed in May, she said. Construction on the project off of Liberty Road began in late October, set to cost approximately $1.43 million dollars.

Though there is expected to be a monthly fee for membership to the pool, Agner said the YMCA plans to help compensate for some of those fees for those who cannot afford it.

“One of the goals of the YMCA is to not exclude anybody,” she said. “We are going to reach out to some of the businesses in the area to sponsor some kids for swim lessons.”

Agner also said that as project completion nears, there will be a demand for help at the pool to make sure all occupants stay safe.

“We need someone to receive their lifeguard instructor certification to teach other guards,” she said. “And then, hire more lifeguards.”

In addition, Natchez YMCA held its first official program this past May with a soccer league for 3 and 4 year olds. Agner said it is on track to begin the program again this fall and hopes to add one for 5 and 6 year olds.

“I would like to have at least 25 kids in each group,” she said. “Once the new year starts, we will reach out to the schools to see what they need to do to spread the word. It’s a lot of footwork.”

“Just because I don’t know about it, doesn’t mean we can’t do it,” she said. “I want to do all I can to meet the needs of the people. I think there is a lot of hope for this year.”

For additional information or questions, contact Agner at 601-326-0558 or aagner@metroymcams.org.