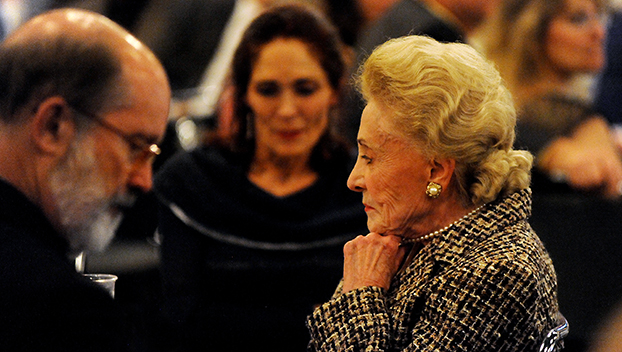 Bettye Jenkins listens during the announcement of the Natchezian Woman of the Year award at the Natchez-Adams County Chamber of Commerce Gala at the Natchez Convention Center in November. (file photo)

Jenkins part of Miss-Lou economy as leader of tourism, business on river

NATCHEZ — Vidalia Dock and Storage owner Bettye Jenkins was asked by her family to go to the Natchez-Adams Chamber of Commerce Gala, just because it what something they ought to do.

But when Chamber President Debbie Hudson started listing off some of the early accomplishments of the Natchezian Woman of the Year, she realized her daughter and granddaughters had completely surprised her.

“I was really pleased, and really surprised.”

Jenkins was born in Gloster, but moved to Natchez with her parents as a child of approximately 11. She graduated from the University of Mississippi and worked in the district office of California Company, which is now Chevron.

Having access to trade journals, Jenkins began to write to steel companies in the U.S. to recruit them to the area. T.E. Mercer of Fort Worth, Texas, agreed to open up an oilfield pipe yard in Vidalia.

Jenkins and others acquired 11 acres of land on the river and formed Vidalia Dock and Storage Company in 1956 where the old ferry came from Natchez to Vidalia.

“We have seen so many things come and go,” Jenkins said. “We have had to look for work in other places. We want to stay here, we just have to look for things to do.”

Some of that work they found included towing limestone and other products to the Red River and Ouachita River, servicing local grain elevators, founding Two-J Ranch, selling agriculture lime to farmers and crushed limestone to the Mississippi Department of Transportation and contractors, and most recently in 2016, forming the 363 Drydock and Repair Service, which repairs cargo barges and vessels.

The company today employees 20 people, including one of Jenkins’ daughters , Carla Jenkins, and two granddaughters.

“It has been a big part of my life, the boats and all,” Jenkins said. “I am so fortunate to have my children working with me, and our work is interesting.

“And we have wonderful help and great river pilots. I would put them up against any on the river. It is just something we love to do.”

The owner of Hawthorne, Jenkins has been working with the Pilgrimage Garden Club since approximately 1947, having served as president of the board twice and secretary treasurer for approximately 35 years.

“At the time, I think my mother belonged to the Natchez Garden Club, but all my friends were with Pilgrimage Garden Club, so that is how I got in with them,” Jenkins said. “Of course, it has been a lifetime work in trying to get tourists here in Natchez.”

Jenkins said she enjoys tourists coming to her home, and they say they enjoy it, too.

“They enjoy our house because it is a home, and we live in it,” Jenkins said. “They love the family pictures and realizing that it actually is a home.”

Having the chance to talk to the tourists is also a nice thing, Jenkins said.

“It is a really satisfying thing to talk to people and find out what a unique town they think we have,” Jenkins said. “There are so many homes left here. It is remarkable.”

With the manufacturing industry leaving the area, Jenkins said tourism is Natchez’s greatest economic driver, and she’d like to see it advertised more where the town could take off like a Savannah, Ga.

“Lack of funds has held us back, but we have received a lot of free publicity, which is great,” Jenkins said. “People really do enjoy Natchez and are charmed with it when they get here. Last year, people from Australia came and said, ‘Natchez is the best kept secret in the United States.’

“I totally agree with that.”

Jenkins said she hopes for growth in the future of Natchez.

“I would hope that we could get more nice industries in here that would give people like us a better advantage,” Jenkins said. “I love the town. I love the small town aspect of it where you know most of the people here — it is just a wonderful little town and I would like to see it grow.

“We had a booming town when the oil industry was here, but we have lost so many people. I wish tourism could replace oil, and we could really advertise our wonderful town more.”