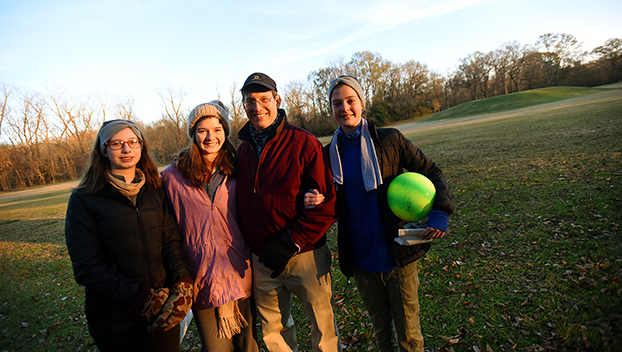 Charlie Leckie and his daughters, Scarlett, Colleen and Mary-Esther hiked on the trails in the woods along St. Catherine Creek near the Grand Village of the Natchez Indians Sunday afternoon. (Ben Hillyer / The Natchez Democrat)

NATCHEZ — Despite the biting wind and freezing temperatures, Charles Leckie and his three daughters ventured into the woods Sunday on a treasure hunt.

When The Dart landed on Jefferson Davis Boulevard, Leckie and his teenage daughters, Colleen, Scarlett and Mary-Esther, had just finished their hike in the woods along St. Catherine Creek near the Grand Village of the Natchez Indians.

The quartet was warming up inside the Grand Village gift shop, making a few purchases before heading back to the house.

When Leckie was a child, the creek and the woods were his playground and adventure was a short walk from his house.

A few decades later, Leckie now lives in Tupelo with his family and looks forward to hiking the trails of his childhood with his children — even on the coldest day of the year.

The son of local educators John and Jean Leckie, Charles and his brother and sister lived in the neighborhood near the Grand Village.

“Growing up in this neighborhood, these fields and these woods were my playground, so any time I get the chance to take my children there, I do,” Charles said. “It lets them understand what growing up was like for me.”

Charles said he and his friends spent many hours exploring the creek and woods looking for treasure of any kind.

“We would go looking for artifacts,” he said. “we would find fossilized remains, pottery and things like that on the creek.”

And when they were not on treasure hunts, Charles and his friends would find other adventures along the way.

“When Johns Manville was still operating, we would take their insulating mats, make rafts out them and float down the creek,” he said.

Floating down the creek was not an option Sunday for the foursome. But the group did manage to get near the creek to find some treasure — sort of.

Even though their find was not an arrowhead or a similar artifact, the girls said they had a lot of fun.

“We went down to the creek and started stepping into the quicksand, and we started sinking,” Colleen said looking down at her shoes.

Mary-Esther said she enjoyed rolling down the mounds.

With the sun quickly setting and the temperature dropping Charles led the group back to his parents’ house, with his daughter Mary-Esther kicking the afternoon’s loot — the green rubber ball — along the way.