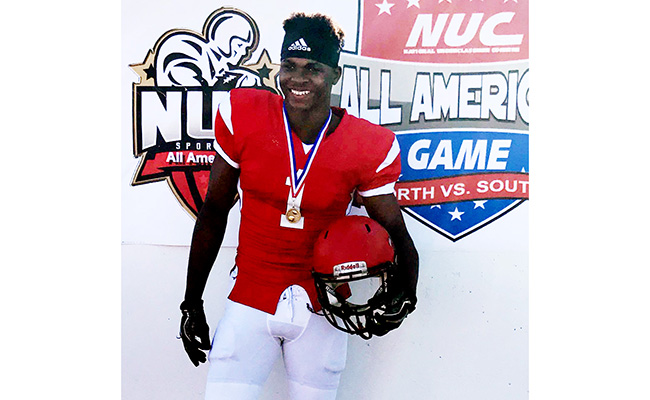 At first he was nervous, but as soon as Trinity Episcopal’s Jakarius Caston stepped on the practice field at the National Underclassmen Combine’s All-American Game, everything felt just right.

“I didn’t know anybody there. There were kids from everywhere,” Caston said. “Anything you wanted to do you had to fight for, but I wasn’t scared. I wasn’t going to show anybody any mercy.”

And he sure didn’t.

Caston was named the Most Valuable Player for the all-star game for 10th and 11th graders on Dec. 30 in Daytona Beach, Fla. During the game he intercepted two passes, including returning one 103 yards for the game-winning touchdown for the South team.

“From the first the day (of practice) I was a little bit nervous, but I knew I had to go hard the whole time,” Caston said. “After that first day, it was like I was at home. I wasn’t sure who I was going to go up against, but I was playing really physical with everybody. It didn’t matter who it was.”

Caston was invited to the event after attending a camp from the same organization this past summer in Houston. While in Florida, he was selected to play as a cornerback, as well as a wide receiver.

Despite doing so well in practice, Caston said he was surprised by the MVP honor.

“I was happy, I couldn’t stop smiling. We took like a thousand pictures,” he said. “It felt like one of the Trinity games because everybody wanted to come up and shake my hand and tell me how good I played.”

While Caston added to his list of personal accolades, Trinity football coach Graham Roberts was just as happy.

“He called me a couple times to tell me what was going on,” Roberts said. “It was neat to hear him talk about it because you could tell he was having a good time.

“Everybody knows he is a special athlete. What’s frustrating sometimes is that it is hard for kids to get noticed in the area where we live. This gets him on such a big stage and the recognition that he deserves.”

After the Saints fell in overtime in this past season’s MAIS Class A Championship game, Roberts is happy to have Caston back for another year, too.

Caston finished the year with 53 catches for 1,217 yards and 17 touchdowns. He also rushed for an additional four scores and notched four interceptions and one fumble recovery on defense.

“I’m junior heavy,” Roberts said. “It’s tremendous to have them back. Not until too long ago, they were still talking about football season. Everyone knows what the expectations are for next season.”

The Saints will also return junior quarterback Sterling Yarbrough who finished this past season with nearly 3,400 yards passing and 40 touchdowns.

The connection, Caston said, is very important to have for another season.

“I’m ready for next season. It’s going to be great,” he said. “When it’s time to go we aren’t going to wait. We are going to be going from the start.”