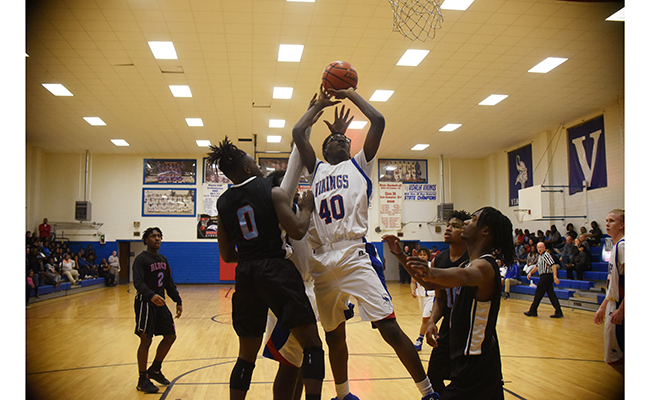 Vidalia High School senior Brandon Vantree goes up for shot during a recent game against Block High School. Vantree is one of two seniors for the Vikings this season. (Nicole Hester | The Natchez Democrat)

The Vikings made the move from LHSAA Class 3A to 2A this past summer, but Sanders said he wants his team to focus on making every win count.

“We are hoping to make the playoffs again,” he said. “We don’t want be down in the bottom 20s or 30s, because that’s an easy way to go out in the first round. As long as we have enough wins, it’s all about the power points.”

Vidalia was ousted in the first round of playoffs last season, and are currently ranked No. 24 in Class 2A.

Despite dropping its first district game of the season Tuesday night to No. 1 Rayville, 82-48, Sanders said he still isn’t worried.

Rather than completely relying on others, however, Sanders does have a plan on how to capitalize on Vidalia’s strengths.

“We lack size,” he said. “I think this is the shortest we have been in a long time. We have to use our quickness as best as we can and run when we can. We can’t really post them up, so we have to be able to beat them down the court.”

“We need leadership of course, especially on the court and in the locker room, too,” Sanders said.

With a young group, Sanders hopes his team can continue to work out its kinks and settle into what works for the Vikings, not anyone else.

“One of our biggest problems is that we want to shoot too quickly most of the time,” he said. “We have to be able to settle down and look for the best shot instead of settling for the first shot. We should be fine if we do that.”

The Vikings will play next at 7:30 p.m. Friday at Beekman Charter.

Vidalia girls basketball coach Damus Smith isn’t looking for wins this season, but he does think it couldn’t help his team in the long run.

“I’m trying to get them to set a goal. We have to be somebody that is competitive,” Smith said. “It’s a confidence factor, and I think that is what they are lacking right now. If we could get a couple of wins, I think that would make a big difference.”

The Lady Vikings (4-7, 0-1) are low in numbers, sporting a group with just one senior in Jamya Walker. Juniors Angel Heckard and Camiya Washington follow close behind.

“It really is a young ball club, which is kind of tough,” Smith said. “When we first came out to tryouts, we had about eight. They know they are shorthanded.”

Smith said though this year might be a little rocky, the future looks bright for the program.

“I’ve been impressed with (sophomore) Jamya Smith. She is looking pretty good and I think she is going to get better,” Smith said. “Freshman Kita Lutcher is also a good one. She comes from a basketball family, so she is going to be a big help down the road.”

If anything, Smith hopes to see one thing before the season ends. Especially following Tuesday’s district loss to Rayville, 67-23.

“I’m not focused as much on wins, but I am looking for complete games,” Smith said.