Trinity Episcopal Day School to close permanently in May 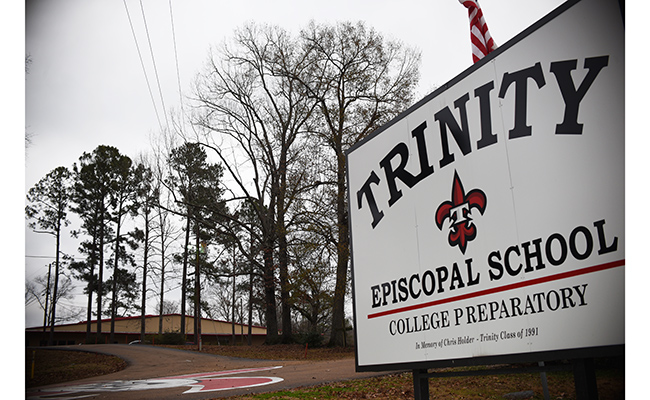 NATCHEZ — Trinity Episcopal Day School Board members announced Friday the school will close permanently after graduating its last senior class in May.

In a letter sent to parents Friday, School Board Chairman Bazile Lanneau Jr. said the shuttering of the school was, “due to dwindling local population, a depressed local economy and eroded support for the school among parents, friends and alumni.”

Lanneau said Trinity’s Board of Trustees made the difficult but necessary decision.

“Trinity’s board is comprised of Trinity graduates, former teachers and parents, so you can imagine that the prospect of ‘letting go’ has been agonizing,” Lanneau said in a press release concerning the shutdown. “Trinity School has been a part of our lives and that of our children for many, many years.”

Lanneau said the most recent headmaster, Christina Ferrell Daugherty, has made significant gains in stability and morale, but that the improvement was not enough to save the school.

In the 1990s, at the school’s largest, Trinity had approximately 400 students walking its halls.

The enrollment has dwindled, however, to approximately 140 students in Pre-K 3 through 12th grade in the 2017-2018 school year.

In a letter to parents of Trinity students, Lanneau said the school needs approximately 250 students to remain viable.

Within its shrinking enrollment has come a depletion in funds, the release states.

The board and headmaster will host a meeting at 5:30 p.m. Monday in the Trinity gym to discuss the future of the school and to answer parents’ questions.

Lanneau said all decisions about the dissolution of the school and the property on which it stands will be made at a later date.

“In the meantime, we will maintain our academic and athletic programs and continue to serve our students and families,” Lanneau said in the release. “We also want to facilitate a smooth transition to the schools of their choice for next year. I am especially grateful for  Fr. Ken (Ritter) and Trinity Episcopal Church for allowing us to wind down gracefully.”

The Rev. Ken Ritter, priest-in-charge at Trinity, expressed his sadness to see the closure of a school that had served its community since 1971.

“While others no doubt share a feeling of sadness, the joy, promise and success of Trinity School cannot be forgotten,” Ritter said. “There will always be fond memories of Trinity for the lives that it has touched.”