‘Atmos Andrew’ just a phone call away after retirement 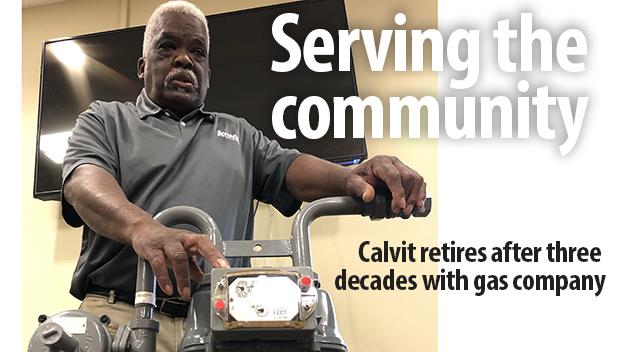 Andrew Calvit explains how gas meter technology has progressed since he first entered into the industry in 1975 as a meter reader. Calvit retired at the end of 2017 after 36 total years of service with Atmos Energy, formerly Mississippi Valley Gas Company. (David Hamilton | The Natchez Democrat)

NATCHEZ — After more the three decades, the man many customers affectionately called “Atmos Andrew” has finally decided to hang up his hat.

He was a friend.

“He is so dear to me and my family,” longtime coworker Leslie Hicks said.

Without saying a word, Hicks spoke volumes about what Calvit means to her and other longtime Atmos workers.

Fighting through tears, Hicks said Calvit remains one of her best friends.

“If something happens to me, my husband has to call him,” Hicks said laughing. “When (Calvit) was leaving here, I said ‘Do I have to change any of that?’ (He said) no.

“There’s not one thing I can say negative about Andrew Calvit.”

How did Calvit come to earn such heartfelt respect and admiration?

If you ask Calvit, he simply just follows the golden rule.

After beginning his second stint at what was then Mississippi Valley Gas Company in 1984, Calvit retired at the end of 2017. But long before his time at the company, Calvit had an unstoppable drive instilled within him by his parents.

Growing up in Cranfield, Calvit said he spent his early days working on the farm for a modest pay of $3 a day.

He would later serve in the U.S. Army, and at one point came just short of being sent to Vietnam.

Then, in 1975, he joined what would become his “second family,” with what was at the time Mississippi Valley Gas Company. He began his career as a meter reader.

In 1978, Calvit went to pursue a bachelor’s degree at Copiah-Lincoln Community College. For the next six years, he would take night classes while working at Armstrong Tire and Rubber Company.

He returned to the gas company as in 1984, and he would never look back for the next 33 years.

He would spend 18 years as a marketing representative and technical assistant before Atmos Energy purchased the company in 2002. Two years later, Calvit received his Master’s in Business Administration and earned the title as operations supervisor.

No matter where he stood in the ranks, Calvit said he gave his all.

And in all those years of service, Calvit only missed a combined one week of work: one day when his father died, three when he lost his wife and three when he tore his ACL.

“I’ve never been late but one time,” he said. ��Five minutes late — got stuck in traffic in Natchez, believe it, or not. Never called in sick or anything.

“I just believe that a person ought to dedicate themself to a job.”

The reason, Calvin said, is because his mentorship style had always been to lead by example. One of his mantra’s that embodies that style is “boots on the ground is better than planes in the air.”

“I’m an old military guy … the generals will fly over and say, “Oh, it looks good down there! The troops are doing a good job.’ But here, we’re down here in the middle of a hot fire.

“At a distance, things look good. But (once) you get down there in the trenches with your employees, you know what it’s like. You know what they’re going through.”

His devotion did not go unnoticed, as that attitude won the respect of both peers and understudies alike.

Distribution Operator Kejuan McClain, who worked with Calvit for 20 years, said he bettered himself just by watching Calvit.

“When I come into the office in the morning, he’s always reading his Bible,” McClain said. “He’s always trying to give you good advice, so that inspired me a lot.”

Crew Leader Russ Temple, whose work ethic Calvit commended, credited his former boss for being understanding and down to earth.

“Easy to talk to, easy to get along with,” Temple said. “Just a good person … and to me, he’s that type of person all the time, not just sometimes.”

His colleagues said Calvit’s admirers run the gamut — from the rank and file up to the corporate headquarters in Dallas.

Aside from his work at Atmos, Calvit has contributed heavily to charitable causes in the area, including his work as the president of the local Habitat for Humanity chapter.

He also remains president of the Natchez Rotary Club.

“He’s a pillar in the community,” Chuck Kennedy, the man who assumed Calvit’s work role at Atmos, said.

Kennedy said his life was tremendously impacted by Calvit and called replacing him “a monumental task.” But Kennedy said he took comfort knowing that Calvit would be there to help during the transition.

“Our relationship goes outside the bounds of a working relationship, because he makes it personal,” Kennedy said. “He always made it personal — things for me to work on to develop myself.”

Calvit called his departure emotional and even jokingly tells people that he is on “retirement probation.”

He thanked Atmos for all the support over the years, including from Mississippi Division President David Gates.

“I’m not just going to be twiddling my thumbs,” Calvit said with a smile.

He pledged to remain active in the community, and Calvit stressed to his former colleagues that “Atmos Andrew” is only a phone call away when they need him.