The Dart: Man enjoys being his own boss 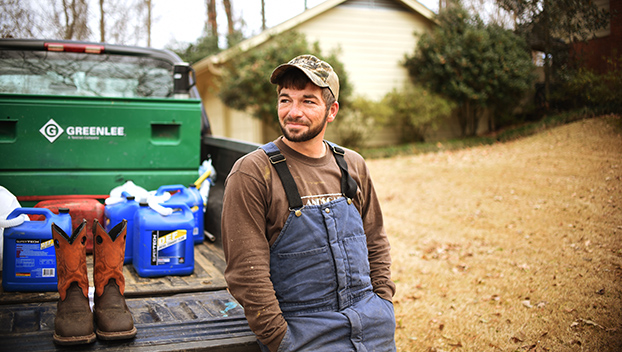 NATCHEZ — Charles Moak was hard at work when The Dart landed on Duster Drive Sunday afternoon.

Moak, a pressure washer in hand and dirt spattering his work clothes, has many trades, but Sunday his job was simple: Make old things beautiful again.

Moak pointed contentedly at the newly cleaned drive that circled in front of a large, two-story house.

You could see clearly, he said, where his work had taken effect.

“You would be amazed,” he said, “the difference this can make.”

The difference between the unwashed brick and pavement — which was caked with a year’s worth of mud, moss and grime — and the pristine, finished surface was stark.

Moak, who owns and operates his own house repair and landscaping business in Natchez, got his start in taking care of gardens and grounds early.

Moak said he was already working with another local landscaping firm in Natchez at 14.

“Tommy Smith and Billy Graves taught me everything,” he said. “How to prune, when to prune, how to make things grow. It’s all because of them.”

After high school, Moak went offshore, working for long periods away from home and did landscaping when he was home.

After a few years of that, however, Moak said he was ready to stay home and start his own business.

That, he said, is when Moak’s Home Repair was born.

“I thought, ‘Why not come back and be my own boss and do something I enjoy?’” he said.

Moak said he loves the work — he loves being outside, working with plants and making old structures new again.

“You do stay on your feet all day,” he said. “They tell you if you work in your garden for about three hours a day you’ll live longer. If that’s true, I get more than I want.”

Owning his own business, though, he said, can be difficult.

“There are good times and bad times,” Moak said. “My best advice to anyone starting a business is when times are great, save that money. There will be hard times again.”

Times are pretty good now, Moak said, and he has several jobs lined up for the weeks ahead.

Whenever he does not have a new project coming up, Moak said he finds his own business.

“If I’m not working, I’m out talking to people and finding a new project,” he said.

Meeting new people is just another facet of the job he enjoys.

Moak said many of the people who request his services are elderly.

“I like to go by and check on them, make sure they’re OK,” he said. “Even when I don’t have work in the area, I just want to make sure everything is alright. I get to meet some really nice people.”

Outside of his love for the job, Moak said he has another reason for wanting to spend more time at home: his son, Hunter.

“I’d leave home for work and he’d be this big,” Moak said, leveling his hand around mid-thigh.

Now, though the hours are long and the work demanding, Moak said he is happy.