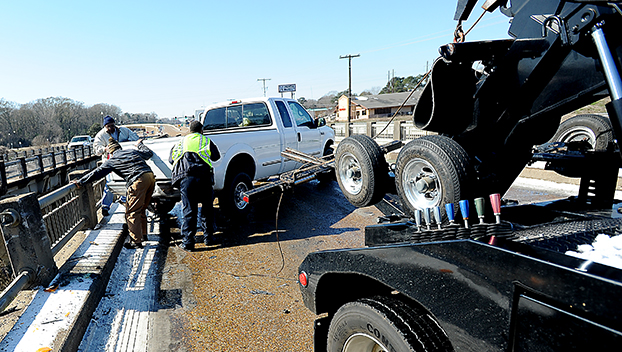 Keth Lowe and Carl Holmes with the Natchez Ford trucking service help James Rowan Jr. get his truck off of the St. Catherine Creek bridge on U.S. 61 North Wednesday afternoon. Rowan said his truck hit a patch of black ice on the bridge and spun into the bridge’s guardrail. Traffic was backed up along U.S. 61 until the truck could be towed off of the bridge. The wreck was one of several in the city that happened as a result of ice and snow in the area. (Ben Hillyer / The Natchez Democrat)

The cold spell turned into a record-breaking occasion in Natchez history.

Intellicast.com lists the record low for the entire month of January as 4 degrees, reached on Jan. 7, 1940.

The extreme cold resulted in various departments investing much of their resources into handling roadways and numerous wrecks caused by the slippery conditions.

“We (also) had over 25 of those (cases) where we assisted people who slipped off the road, lost traction, or slid down the highway and just couldn’t make it up hills,” Patten said.

Natchez Police Chief Walter Armstrong urged residents to only travel if necessary and, if choosing to brave the elements, watch out for shaded areas where ice might remain.

But officials, including Patten, said conditions improved throughout the day Wednesday.

Adams County Road Manager Robbie Dollar said his department had not received any calls about the roads as of 2:30 p.m. Wednesday, and he said 11 a.m. or noon today should mark the end of the hard freeze.

“The worst is behind us, I believe,” Justin Dollar said. “I think this has been our biggest (concern). It’s kind of consumed us for the past two days.”

Justin Dollar said city crews would begin the clean up efforts, such as removing sand from roadways, today if weather permits.

Both Justin and Robbie Dollar said residents must exercise caution as roads could likely ice over again and remain that way through this morning until temperatures rise.

Far less school closures have accompanied the anticipation of safer conditions. One school district has announced closures for today: Tensas Parish Schools are closed for students and teachers, but not 12-month employees.

The Natchez campus of Copiah-Lincoln Community College will start classes at 9:30 a.m. today.

As the roads remain a concern overnight, so does shelter for the homeless.

The Adams County Safe Room will remain open through Friday after the county’s board of supervisors declared an emergency on Tuesday.

As of 3 p.m. Wednesday, four people had sought shelter there.

Zion Chapel AME Church has also opened its doors to those seeking refuge throughout the freezing weather.

Though today’s warmer weather should mean a marked improvement in terms of both area roads and safety in general, local water departments still remain diligent.

“We feel like probably (today) is going to be our big day as far as when some of these pipes really start thawing out and customers start springing leaks,” Natchez Water Works Superintendent Tony Moon said. “We’ll have to get our service folks out as quick as possible to get those cut off so the customers can make necessary repairs.”

Through Wednesday afternoon, however, Moon said Water Works has been able to handle any problems adequately.

“All our water plants are operating correctly and efficiently,” Herring said. “We’ve had crews out 24/7 fixing leaks or anything like that as problems arise.”

The department, Herring said, had not experienced any outages as of Wednesday afternoon.

“And we don’t expect to have any unless a main line breaks,” he said.

Moon said Natchez Water Works would be open Thursday and that any customers who experience an emergency while the office is closed should call 601-445-5521 ext. 8.

He encouraged customers to report any leaks as soon as possible in order to prevent major water loss, which he said could affect Water Works’ entire system.

Herring said his customers could call 601-446-6616 to report any problems or in case of an emergency.