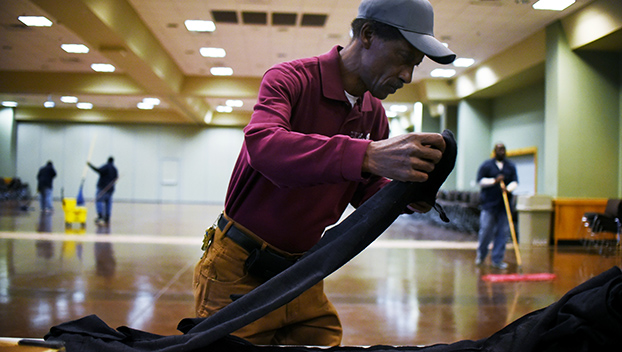 Michael Lyles, maintenance supervisor, prepares the room for people seeking shelter from the cold temperatures Wednesday at the Vidalia Conference and Convention Center. The convention center has several events going on along with being open to the public this week. (Nicole Hester / The Natchez Democrat)

NATCHEZ — Energy providers in Louisiana and Mississippi reached peak power capacity early Wednesday, putting communities in the Miss-Lou at risk of losing power during one of the coldest days on record.

Midcontinent Independent System Operator South, a regional electrical transmission organization that operates the power grid for Louisiana and Mississippi along with Arkansas and a portion of Texas, controls energy flow to providers including Entergy, Southwest Mississippi Electric Power Association, and the Louisiana Energy & Power Authority.

MISO alerted several energy providers early Wednesday that the power grid had reached maximum generation and, if the load could not be lightened, the company may have to “shed” some communities in order to stabilize the grid.

Mark Brown, communications advisor at MISO, said conditions were improving late Wednesday and the burden on energy companies should lighten soon. The maximum energy event was in effect, he said, from 7 a.m. to 2 p.m. Wednesday.

“As the region’s grid operator, the Midcontinent Independent System Operator is managing heavy energy demands Wednesday morning due to the frigid temperatures that have encased the South region particularly,” Brown said. “If necessary and in extreme conditions, MISO per its procedures may exercise temporary load shed to preserve the stability of the region’s power grid. At this time, conditions have not reached that point in the region and are improving.”

Brown said MISO South, based in Little Rock, Ark., must manage challenges created both by power plant outages as well as dropping temperatures.

As the day progressed, however, Brown said temperatures rose and conditions improved for the electrical grid.

Brown said Wednesday’s power consumption set a new record for MISO South at 32,000 megawatts, the highest peak for a winter increase yet.

The average energy demand for MISO South in the winter — excluding high-load days — is 23,400 megawatts.

Residents were asked to open their blinds to allow sunlight in, turn off unnecessary lights or electronics and avoid using the dishwasher, washing machine or dryer while energy consumption is high.

Debra McGee, public relations specialist for Southwest Mississippi Electric, said the utility, which is a member of Cooperative Energy, was notified early Wednesday morning of a “critical shortage” of energy.

“If every member helps in this effort, we can avoid an emergency situation,” McGee said.Vidalia Mayor Buz Craft said in the case of a shutoff, residents would receive only a 15-minute warning before the power is removed.

Craft said in the event of a shutdown or if any residents are currently without heating, the Vidalia Conference and Convention Center was open as a shelter.

“We have the resources to transport if necessary,” Craft said.

Many people who are elderly or shut-in have called, Craft said, to get on the list of transports to the convention center in the event of an energy shutdown.

Tim Runnels, customer service specialist for Entergy, said the demands for power have peaked and that the company will monitor usage as the cold weather continues.