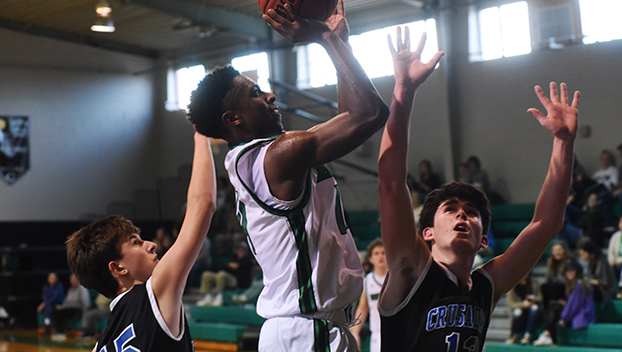 NATCHEZ — Being a competitor is simply in the blood of Cathedral School’s Ty Tobias.

“I just really like competition,” he said. “I think I was just born with it. I love going up against the next guy in line.”

As one of three seniors on this year’s Green Wave roster, Tobias leads the team as a point guard and shooting guard.

In the ever-evolving sport of basketball, Tobias said, he thinks it’s crucial to be versatile and that it definitely helps his level of competition.

“I think point guards are supposed to set the tone, but recently they have become more of a scorer than they used to be,” he said. “I think a shooting guard is more of a passer than it used to be, too. I think we are getting to a point where soon there will just be a guard.”

Still, Tobias is a leader regardless of his title.

Among fellow seniors Caden Poole and Conner Branton, Tobias has had the most game-time experience, which Cathedral Coach Matthew Hall said is invaluable.

“I want the ball in his hands,” Hall said. “He is without a doubt the hardest worker on this team and they will all agree with that.”

Tobias said though a drive to win is something he has had for a while, it isn’t always easy to manage as he tries to stay conscious of his actions.

“Being a senior, this is my first year that I haven’t played with everyone that is on the team before,” he said. “This year I have been trying to allow my competitiveness to seep into others.”

So far, it has taken time, but Tobias thinks Cathedral (6-12) is inching closer to becoming the best it can be.

“I think we have a lot of potential,” Tobias said. “The season is just getting started. We can still do what we set out to do.”

Before the season is over, Tobias wants the district title and for Cathedral to make a trip to the state tournament.

“Those are the goals I had at the beginning of the year, and I’m sticking to them,” he said.