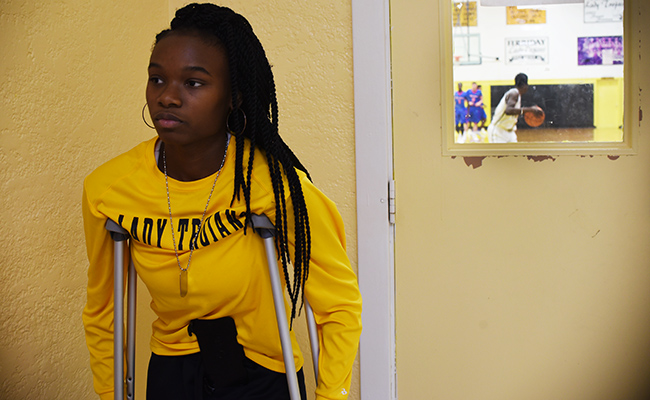 Ferriday High School’s Anasia Turner stands with crutches Tuesday during the boys basketball game against Delhi Charter in Ferriday. Following a foot injury she suffered last Friday, Turner is waiting to hear from doctors if she will be able to play again before she graduates. (Nicole Hester | The Natchez Democrat)

Ferriday High School’s Anasia Turner can deal with the physical pain. Emotionally, however, each day hurts more and more.

During last Friday’s game at Mangham, Turner jumped up for a rebound and landed on the top of her left foot, stretching the ligament that runs across horizontally.

Now, the Lady Trojan senior must play the waiting game.

“Day by day, I think it’s getting worse,” Turner said. “As the days go by, it’s getting closer to another game and I know I’m going to wish I was playing.”

Turner has an appointment scheduled with her family doctor today to determine the extent of her injury. While a visit to the hospital in Rayville confirmed nothing in her was foot was broken, Turner said she is nervous to hear the prognosis.

“At first, they said give it a week,” she said. “But, as I’ve talked to more people who have had this happen to them, they were saying it takes longer than that. I just don’t know yet.”

Ferriday coach Lisa Abron added she knew something was wrong right away.

“My whole mind went in a blur,” she said. “It was very scary. It turned all kind of colors right then.”

Abron was one of the first people to call Turner Friday night when she was discharged from the hospital. The support, Turner said, is immeasurable.

“She told me not to be down. I was mad at myself, but I knew I could do nothing about it,” she said. “She told me I just need to put it in the past.

“I knew that she cared. It really made me feel good.”

With the strength of her coach, Turner is doing her best to deal with her developing situation as it comes. On Tuesday, she watched her team defeat Delhi Charter as she sat on the school’s stage behind the bench.

“If I could have tied it up as tight as possible, I would have gone out there to play,” Turner said. “That’s really just how bad I want it.”

Realistically, Turner knows she isn’t able to play — at least for now. In the meantime, she is finding other ways to lead her team.

“They need to play like it’s their last game. If they want it, they will go get it,” Turner said. “I’m trying to encourage them and let them know even though I’m gone, they need to go hard.”

Equally, Turner said she has received immense encouragement from her teammates.

“If I try to pick up a basketball, it doesn’t matter if I’m just trying to give it to them, they don’t want me to even touch it,” she said.

While the remainder of her final season is still hanging in the balance, Abron said she has no doubt Turner will turn out better than this road bump has left her.

“In reality, that could be her last game,” she said. “She is keeping a real positive attitude about it, though. It’s a big lesson, but I can see her as things go wrong as an adult being able to overcome it. She has really been awesome.”

Turner, in the midst of ongoing uncertainty, thinks the same.

“It’s miserable, but it is getting better,” she said. “I know I can’t blame myself, but it’s hard not to think about the fact that I would have never jumped up if I knew what was going to happen. I just can’t think like that.”

Ferriday is scheduled to next play Friday when it travels to General Trass.