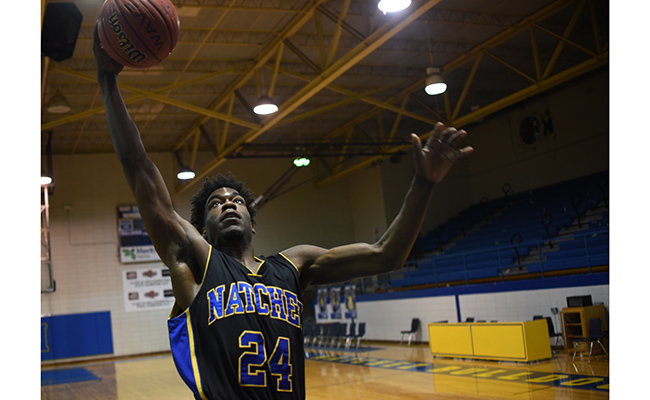 Natchez High School’s Izzy Holmes Jr. is one of six seniors for this year’s Bulldog basketball team. Holmes has started as a guard at Natchez for the past three years. (Nicole Hester | The Natchez Democrat)

On the Natchez High School senior’s mission to stand out from his peers, Holmes doesn’t necessarily mind the attention.

“I know people are watching me,” he said. “Often times when I go to Wal-Mart people see me and say, ‘Hey you’re the kid who is real good at playing basketball.’”

As he recognizes his presence spanning across the city, Holmes has set his mind to working hard for the right reasons.

For Holmes, one of his biggest motivations is his community.

“Growing up, I’ve seen some good things and some bad things,” he said. “This is a small community, and you can either let it make you or break you. That’s the great thing about it. It has a rich culture, and when I walk outside I feel like it’s just different than when I go to Jackson or Baton Rouge.

“The people around here are great, actually. They just need the inspiration to overturn some things. I just want to keep doing what I’m doing so I can come here and give back and give this city some hope. I never want to forget where I’ve come from.”

Through good times and bad, Holmes does his best not to take his position for granted. He often skips his lunch period to continually perfect his skills.

Though Holmes has settled into his role as a lead guard for Natchez High, it has required an immense amount of growth.

Holmes has started for the Bulldogs for the past three years, Natchez coach David Haywood has watched as he has matured.

“When I got this kid, he was very athletic but not very fundamental,” he said. “He loved basketball and wanted to do really well but didn’t quite understand how. It took some of those days where he had to learn things the right way for his sake.

“I remember him being a freshman and he thought just because he ran enough or something, it would be enough. We usually ended up being here all day.”

Holmes remembers being a freshman, too.

“Looking back, I was just a skinny little kid trying to make the varsity team,” he said. “Now, helping this team and being the face of this team to hopefully make a playoff run, it’s wonderful.

“The tough times are what make the good times happen. I’ll miss the times we had to run for an entire class period, because it was bonding with my teammates — my brothers.”

Moving forward, Holmes knows he is far from done. Among a handful of potential scholarships, he hopes to carry the basketball legacy he has made with him at Natchez.

“I want to do things that haven’t been done in a long time,” he said. “What can I do to make kids look up to me? Not only in going to college, but trying to pursue professional dreams, too.”

And whoever next wears the No. 24 jersey, Holmes hopes they take pride in his dedication.

“I really feel like I’ve had a great four years of basketball,” he said. “That number is very special, and whoever it is, I hope they do it bigger and better and me.”