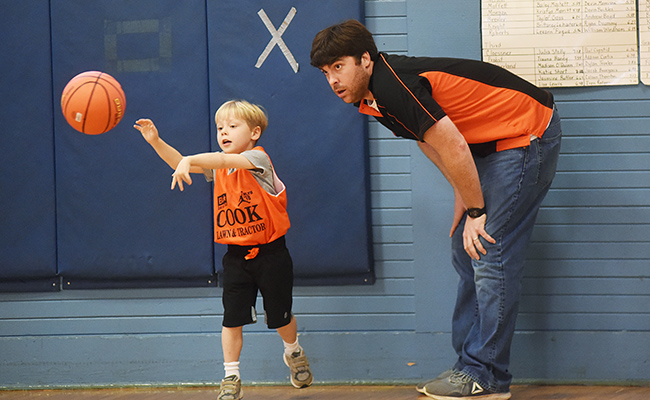 A good place to start building the complete athlete is to make sure the athlete has a desire to practice what is being taught.

From a young age — like Russell Cook’s 5-and 6-year-old basketball team — it often takes some creativity to harvest an athlete’s willingness to learn.

For Cook, he uses what the young ones know to his advantage.

A reward system — often times intangible — is Cook’s way to keep his the players on his team interested.

“They like to win,” Cook said. “At this age, even they understand winning and not winning. When they see they are winning, it makes them want to try harder.”

Cook’s team — part of the Miss-Lou Youth Basketball League — notched a victory Saturday afternoon at the Vidalia Upper Elementary Gym, and he said it can definitely see the impact it has on the young learners.

“When you get the one that doesn’t usually score and they finally do, it’s awesome to see them dancing down the court because it’s something you know they have been working on,” he said.

Another way to keep his players attention, Cook said, is to allow them to interact with each other.

“They want to do it because their friends are here,” he said. “Playing together helps.”

While Cook said sometimes it can be hard to keep their attention span long enough for the information to sink in, his players need to be taught in order to be the best athlete they can be.

“At the end, you want everyone to be able to have a chance,” he said. “All of them aren’t going to be basketball players in the long run, but I know it is helping them learn team sports. It helps them develop skills.”

To get there, Cook said it is also important to be repetitive.

“If you wait and start them at a older age, they will be so behind,” he said. “You’re only going to get so much out of them so you have to take it when it comes and keep going it over (the skills). We just try to keep them fresh and these skills on their mind.”