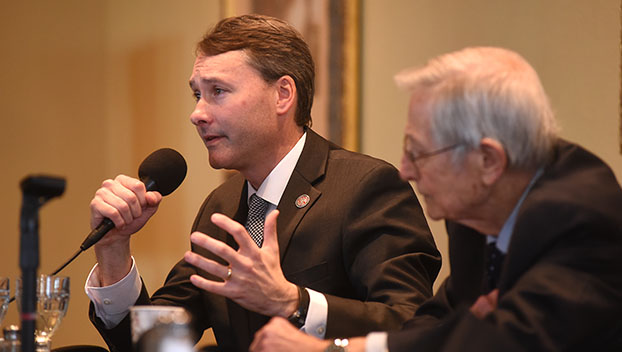 When it comes to taxes, Mims said he wants to make sure the tax dollars from residents are spent wisely.

When asked where the state spends too much of taxpayers’ dollars and where the state doesn’t spend enough, Dearing said he would like to see more money put in health, especially mental health and public health.

“Health issues affect all of us,” Dearing said.

“I am not looking for more revenue,” Mims said. “I believe we ought to be able to fund state government through the $6 billion budget we already have.

“I am not looking for more of your money at this time,” he said.

Similarly, Mims said he does not believe more money is the answer for education.

When asked how local school districts are expected to improve when the current proposal in the legislature will reduce funding for poor-performing districts like the  Natchez-Adams School District, Mims said throwing money at the issue does not guarantee success.

“Money does not solve problems in education,” he said. “It takes a lot more than money.

“Lots of people have a responsibility to education — superintendents, principals, teachers, parents and students. All five play a key role.”

Both Dearing and Mims said they support the current bill in the legislature to change the school board in Natchez-Adams County into an elected board.

The two agreed on many issues, including supporting efforts to bring an interstate highway for the area, efforts to restore tax credits for movies filmed in Natchez and the importance of bringing a form of prayer back to the public schools.

When asked about the creation of an additional hotel and lodging tax for Natchez, Sen. Bob Dearing said he is still waiting on a resolution from Mayor Darryl Grennell and the Natchez board of aldermen, before seeking passage of the legislation. Without the resolution, Dearing said passage of the new tax is not feasible.

When asked about requested monies for the maintenance and repairs of the Natchez Visitor Reception Center, Dearing said he is not optimistic, but was hopeful some of the $1.2 million requested might be funded.

When asked if Southwest Mississippi would get a state mental health facility, like other regions in the state have, Mims, who is chairman of the public health committee in the house, said getting such a facility is unlikely.

“I think having mental health facilities is important, but at this time I don’t see any new facilities opening up around the state,” he said.

When asked what was the state’s biggest challenge in the next 10 years, Dearing said it the same challenge the state currently faces — providing a balanced budget, especially when tax cuts to corporations have put a strain on the state’s revenue stream.

Mims said the biggest challenge is finding a way to provide opportunities that convince young adults to live and work in the state.