Season to remember: Ferriday senior has mind set on ending on positive note 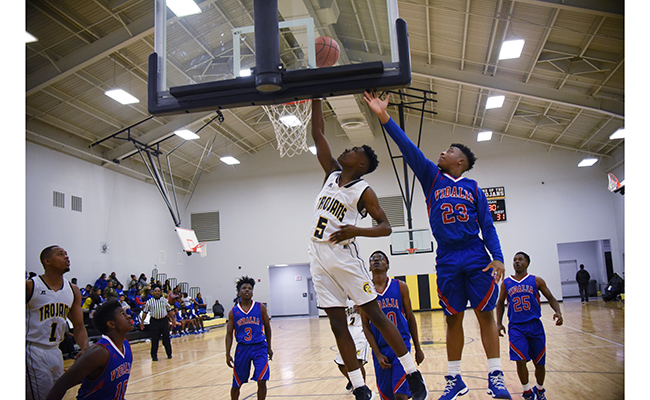 Ferriday High School’s Curtis Collins floats in a layup Tuesday during the Trojans’ win over Vidalia in Ferriday. Collins is one of four seniors this season. Others Ferriday seniors are Dantrieze Scott, Lewis Matthews and Marquell Griffin. (Nicole Hester | The Natchez Democrat)

Ferriday High School’s Curtis Collins wants to go out in his senior season with a bang.

Without much playing time in previous years, Collins is ready for his chance to shine.

Collins said his desire to end his career in a Trojan uniform on a positive note comes from the heart.

The passion, Collins said, comes straight from childhood. His favorite person to play with growing up was his cousin Carlos Collins — a 2017 Ferriday High graduate.

“He was the one who got me into basketball. I really didn’t like it before,” Curtis Collins said. “It just stuck with me. From about the third grade, we used to always talk about games when we came home, and he would teach me how to do things like shoot and dribble.

“Every day we would play against each other.”

The lessons from his early years are paying off now as Collins leads a group of four seniors late into the season for the Trojans. After a rough start, Ferriday (16-10, 9-1) is currently ranked No. 10 in the LHSAA Class 2A Power Ratings. Its one district loss had come to No. 1 Rayville.

“I didn’t expect to lose 10, but I do like how we’ve been playing in district,” Collins said.

More important than remembering wins in losses, Collins said, is the opportunity to be remembered by his teammates.

“I just want to be a role model,” he said. “That’s why I go to practice and just simply run hard, because if they see me do it, they will want to do it, too. I go hard every day to make sure that happens.

“I just want them to feel like they can do the same thing.”

From the eyes of coach K.G. Watkins, Collins is certainly making an impact.

“He has put forth so much effort this year,” he said. “Curtis has a lot of potential, and he has come to play every game. I’ve been really satisfied with that.”

From a person who has been through it before, Curtis Collins said his cousin hasn’t stopped giving advice.

“I still talk to him about once a week,” he said. “He just tells me to make it great because it’s going to go by fast.

“I just have to make sure my presence is known.”