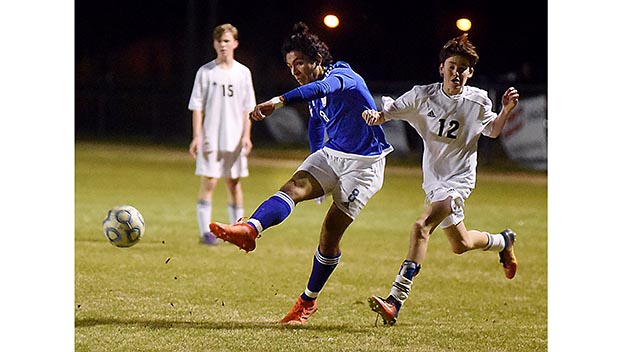 As ACCS scored its first goal approximately three minutes into the game, Cathedral coach Dennis Hogue said his team was forced into overdrive from the get-go.

The Rebels (17-1-1, 11-0) found their way down field early, finishing a strong push offensively as senior Cris Thompson punched in his first of three goals.

“The tone of the match was set early,” he said. “The first goal was so quick, and right of the bat we were digging ourselves out.”

The Green Wave kept its composure, breaking away for a few chances as halftime drew closer. Liam Blackburn had the best chance for Cathedral, kicking a shot high to the left corner of the goal, but it was saved with a leap from ACCS’ Alex McCready.

Blackburn didn’t give up, however, finding the goal seconds later as he swept in a left-footed ball that landed in front of him from a corner kick.

Thompson responded just before halftime with some fancy footwork straight up the middle to make it a 2-1 game at the break.

“It was an amazing first half played by both teams,” Rebels coach Jim Bob Allgood said. “We had some balls that didn’t go in the first half, while they had some breakaways, too.”

Allgood said the difference in the game was his team’s second-half effort.

Both Thompson and his younger brother, Yohan Thompson, nailed goals on free kicks from more than 40 yards out, while senior Daniel Huff added another goal early in the half in order for the Rebels to pull away.

“Our guys turned it up and adjusted out game after halftime,” Allgood said. “It made all the difference in the world in order for us to take our game to the next level.

“I don’t know which Thompson brother had the long shot, but both sounded like cannons when they left their feet.”

Hogue said with the talent like ACCS has, it’s hard to keep up.

“I would out the ball at their feet every chance I got. I don’t blame them,” Hogue said. “Hats off to them for using them wisely. It’s really smart.”

Moving forward, Allgood said he wants to continue to utilize his talent the best he can. The Rebels next play Wednesday when they travel to Park Place Academy before hosting Brookhaven Academy for senior night Thursday.

“I couldn’t be any more proud as we are coming down the home stretch,” he said.

Cathedral will continue its season Monday when it travels to Brookhaven Academy.

Senior Platini Doan scored the second goal for the Green Wave in the loss, as Cathedral will also lose Owen Thibodeaux, Nic Waycaster and Altman Biggs to graduation.