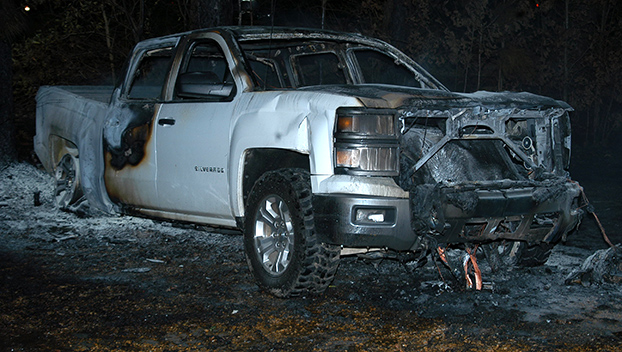 A body was discovered inside a white truck Friday night. The truck, above, was in the Illusions Gentlemen's Club parking lot. (courtesy of The Woodville Republican)

WILKINSON COUNTY — A man whose body was found inside a burning truck on Feb. 2 has been officially identified as a Natchez resident.

Wilkinson County Coroner Nolan Thompson said dental records verified the identity of the man in the white Silverado truck to be Shane Lambuth, 44, who lived in Natchez.

Cause of death, Thompson said, was the heat of the flames.

Firefighters were called to the scene of the burning truck at approximately 7 p.m. on Feb. 2. The truck was stationary in the parking lot of the Illusions Gentlemen’s Club, which was closed at the time.

Thompson was called to the scene at approximately 9 p.m., where he found that the body was too badly burned for facial recognition.

The remains were sent to the Mississippi Crime Lab, which identified the man as Lambuth.

Thompson said he does not know why Lambuth was in Wilkinson County, or why the man did not exit the vehicle when it caught fire.

Neither the sheriff’s office nor the fire department has returned calls regarding the case.