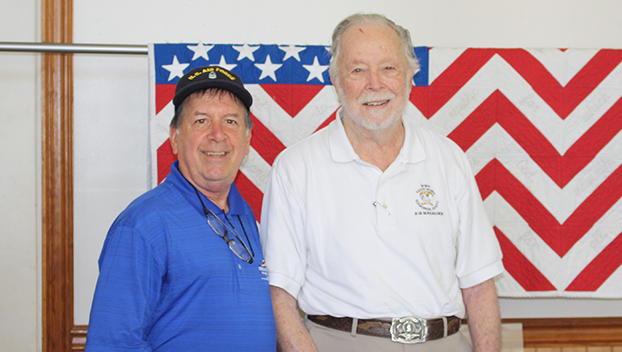 NATCHEZ — A local historian and filmmaker will receive this week one of the highest awards given by the Mississippi Humanities Council.

Mark LaFrancis, who has for years documented the lives of World War II veterans and Civil Rights Era activists, will receive the Humanities Scholar Award this Friday at the 2018 Public Humanities Awards in Jackson.

Of the awards he has won for his photography, writing and filmmaking, LaFrancis said the Mississippi Humanities recognition is “top of the mountain.”

This award differs from others, LaFrancis said, in that it represents not one project, but his life’s work.

“It means more to me because I really feel it represents who I am as a person,” LaFrancis said. “I’ve never considered myself a scholar. I’ve always just felt that this work needed to be done.”

LaFrancis, who recently debuted the finalized version of “The Parchman Ordeal: The Untold Story,” has spent years documenting the success and suffering of Mississippi historical figures.

“The Parchman Ordeal,” which documents the imprisonment of dozens of civil rights activists in October of 1965, is just one of the projects that earned LaFrancis the award.

Alongside his work in Civil Rights Era activism, LaFrancis has been an advocate and documentarian of the life of American soldiers.

Speaking with these soldiers, LaFrancis said, is a life-changing experience.

“It is hard to be in the presence of people who helped save the world,” he said, “without being inspired and affected.”

The experience is also deeply personal for LaFrancis, whose father and uncle were World War II veterans.

“I feel every veteran I interviewed is a part of my family,” he said.

The stories gathered from veterans are not only used in the oral history project; they are also included in school and public programs made available across the state.

LaFrancis has also contributed to oral history projects on the Natchez Literary and Cinema Celebration and the Mississippi Flood of 2011.

In the future, LaFrancis expects to continue his work with WWII veterans while adding more projects to his already busy schedule.

LaFrancis is currently translating “The Parchman Ordeal” into a book, which is set for publication in October near the 53rd anniversary of the incident.

LaFrancis is beginning work on a new documentary and oral history, which focuses on women active in the Civil Rights Era.

“Women of the Struggle: Facing Fear in the Civil Rights Era” will begin filming this summer.

Many of these projects have been funded in part by the Mississippi Humanities Council, LaFrancis said.

“They deserve credit for these things,” he said. “It wouldn’t be possible without them.”

LaFrancis said this award will not slow his efforts to document Mississippi history.