The Dart: Spring cleaning is never too early for Vidalia man 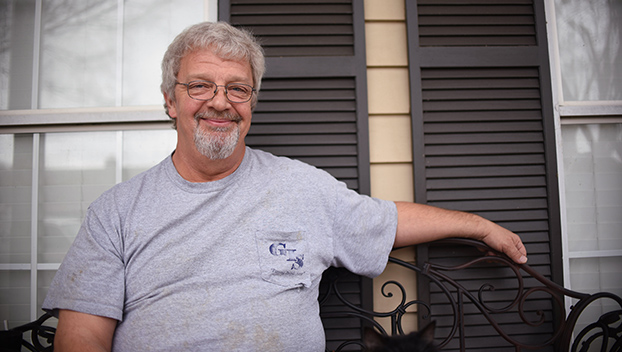 Mark Roberts takes a break from cleaning on his front porch Sunday on Bill Johnson Drive in Vidalia. (Nicole Hester / The Natchez Democrat)

VIDALIA — It is not quite spring, but Mark Roberts said it is never too early to begin spring cleaning.

Roberts had just stepped outside to escape the smell of cleaning surprise when The Dart landed Sunday on Bill Johnson Drive in Vidalia.

“I’ve been cleaning out the pantry today,” Roberts said. “Everything gets all piled up in the back, and sometimes you just need to get it all out and throw it away.”

Roberts said he began spring cleaning Saturday, but that he still had a good day’s worth of work ahead of him.

With each spring cleaning, he said, comes little projects and new paint for some rooms. Many of these projects, Roberts said, are conceived and directed by his wife, Debbie.

“You know how the wife can be,” he said. “She wants a new coat of paint on some rooms.”

Roberts is working on a new project himself, too.

“The pantry is really deep, and it’s easy to just push stuff to the back throughout the year,” he said. “So, I’m going to build us some shelves to maybe encourage us to keep the cabinet clean.”

An avid perfectionist, Roberts said the shelves will take a few days to complete.

“I’m a jack-of-all-trades, but I’m a little slow about it,” he said. “I’d rather go slow and have it done right than replace it later.”

With six children and six grandchildren, Roberts said he often has a house full of rampaging kids and hungry mouths to feed.

When Roberts gets quiet moments — like sitting on the front porch with the neighborhood cat, Tux — he takes them.

“I’ll get back in there in a little bit,” he said. “I just wanted to get away from the smell of bleach for a second.

On the side of the house, a covered motorboat sat alongside dozens of items from the garage — another spring cleaning project Roberts is working on.

“Oh, we’re just straightening things up out there,” he said. “I haven’t taken the boat out for a while.”

Getting started on spring cleaning and projects early, Roberts said, means he may be able to finish before spawning season for the local crappie.

A lazy day on the boat is still a long way off, however, because Roberts has not yet begun cleaning the outside of the home.

“We have beautiful flower beds — the prettiest around — but you can’t tell when we have all these weeds,” he said. “When it gets a little warmer, I’ll have a lot of work to do.”