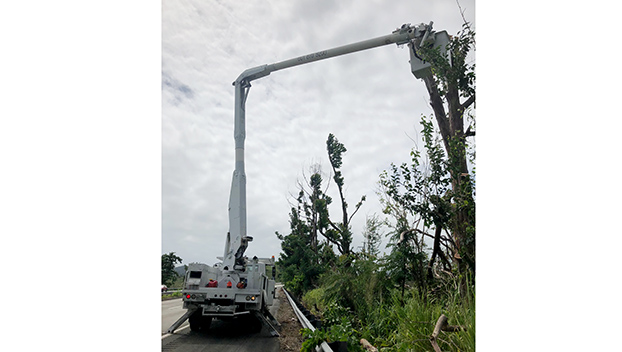 A crew from Allied Tree Company in Natchez is currently in Puerto Rico helping with recovery efforts after a series of hurricanes. (Submitted)

“We saw that there was a lot of devastation down there, and they have a very big shortage of bucket trucks and crews that can perform that type of work,” Ryan Parker said. “We got in contact with DRC, which is a premium contract order … working directly for FEMA and the Department of Transportation of Puerto Rico.”

The two men could be on the island territory for three to nine months, Ryan Parker said.

“He was pretty adamant about getting down there and helping,” Ryan Parker said. “We’ve done disaster relief before in Houston after Hurricane Harvey. The rest was just paperwork and getting there.”

Ryan Parker said one of the company’s trucks stuffed with 12 chainsaws and tools was loaded onto a barge and sent to Puerto Rico.

He said although the damage there is a lot less now than it was a few months ago, there is still a lot to be done.

“A lot of trees have been cleared out of the major highways, but there’s still a lot that are leaning over and threatening to fall at any second,” Ryan Parker said.

“There are still … limbs that are hanging and are a danger of falling into the road—hitting cars, stuff like that.”

Rami Parker said locals have pitched in to help their crew clear limbs and other debris.

“The locals down there are great,” Ryan Parker said. “Everybody there is really helpful. … In (Whittington and Lee’s) off time — walking around with our T-shirts—they get huge thank-yous. Their neighbors, who own the condo they’re staying in, left them a six-pack of local beer and a letter thanking them.”

The bottom of the beer cans that were left for Lee and Whittington say “Restart Puerto Rico.” Ryan Parker said a common phrase among Puerto Ricans, whenever disaster hits, is “Puerto Rico se levantará”—meaning Puerto Rico will rise.

“That’s kind of our motto right now,” Rami Parker said. “We’re very proud of our men that are there and for what they have sacrificed to be there.”