Sunday Focus: Officials will present a draft master plan they hope will raise downtown to a new level 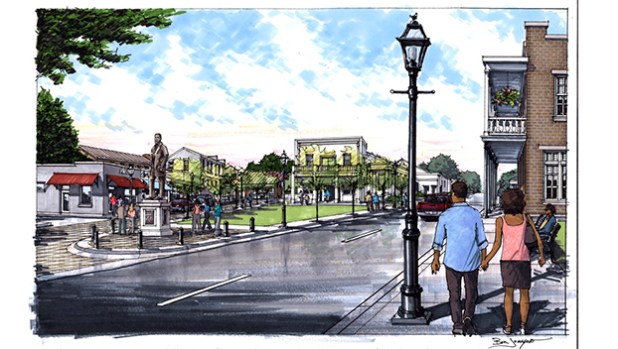 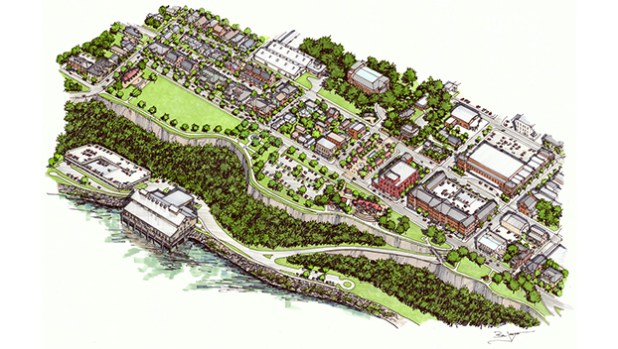 A bird’s eye view of the proposed master plan for the bluff area along Broadway Street. (submitted)

The 5:30 p.m. presentation at the Natchez Convention Center marks the fourth phase of the downtown revitalization plan, the last stage before a final plan goes to the Natchez Board of Aldermen for adoption.

Natchez Mayor Darryl Grennell said he anticipates a positive reaction from the public once they see what the plan has in store for downtown, an area he said spurs on the whole city.

“It has a positive, domino effect on our city,” Grennell said. “We want to get it revitalized, and we want to take it to a new level.”

Aspects of the plan backing that notion focus heavily on the reformation of the bluff and MLK triangle areas, the two “bookends” on which the project has emphasized from the beginning.

The plan, commissioned by nonprofit group FOR Natchez and assembled by a five-member consultant team, proposes numerous ways to improve both areas.

One of the main enhancements for the bluff laid out in the plan is the Broadway Street train depot, which could see improvements such as the addition of a café, a playground and public restrooms.

Other suggestions for the bluff include the construction of a stage pavilion for special events, redevelopment of the post office into a plaza and market and new housing on the Stahlman property off Broadway Street.

As for the MLK Triangle District, also sometimes referred to as the historic black business district, planning consultants envision a cultural hub that celebrates African-American heritage while also making the area conducive to dining, shopping and music.

One of the primary objectives for this area is the rehabilitation of the triangle, comprised of the land surrounded by Martin Luther King Jr., Saint Catherine and Franklin streets.

The plan suggests naming the reformed area “Revels Plaza” after the country’s first black U.S. congressman, Hiram Revels, who was from Natchez.This portion of the plan includes rehabilitating the historic former filling station that sits within the triangle while still retaining the barber shop business that currently occupies the building, replacing the triangle’s worn out concrete with a combination of brick and scored concrete paving and installing public art, such as a statue of Revels. These means and others are meant to turn the area into one of the city’s best civic areas.

Other plans for the triangle district generally include making the area surrounding Cathedral School into a commercial district, improving the area’s parking setup and utilizing the triangle’s green areas as good public spaces.

A third sub-area, however, has spawned through ideas purported via public feedback.

The plan proposes the formation of an arts district on the block of Commerce Street between Main and Franklin streets. The key to this district, the plan states, would be the rehabilitation of the Ritz Theatre as the potential “crowning jewel” of the area.

The culmination of this plan came through the ideas and feedback from Natchezians of all different backgrounds, FOR Natchez President Chesney Doyle said.

“This is not the FOR Natchez plan … this is the people of Natchez’s plan,” Doyle said.

The plan, Doyle said, is meant to reflect the desires of the people as a whole, and that plan should remain constant regardless of what administration is overseeing the city.

From the beginning of the process, which Doyle said conceptually began for her nearly a decade ago, her objective was to create a cohesive outlook for downtown Natchez.

“The idea was if we could all just work together on a common vision, we could move mountains,” Doyle said. “As time went on, there’s been periods of elation and periods of doubt, but right now I’m optimistic that everybody seems to be pulling in the same direction.”

Even to this point, residents still have an opportunity to give feedback on Tuesday’s presentation. Phil Walker, who has headed the consultant team, said the group was still making slight revisions as of this weekend leading up to the presentation, and feedback from Tuesday would be considered for the plan’s final iteration.

“The whole reason we present and don’t just email it to the client is so we can answer questions and hear more feedback so we can make even (more) revisions,” Walker said.

The plan’s adoption, however, would be far from the last step of the revitalization effort, as Walker, Doyle and Grennell all pointed out.

“One thing we need to keep in mind is that this is not the end — this is just the beginning,” Grennell said.

The implementation of the project will mark the true heavy-lifting portion of the revitalization effort.

One of the main means of implementing the plan is the rejuvenation of an entity that oversees Downtown Natchez, which Doyle called the most important step of the entire effort.

The organization, Doyle said, must also be headed by a paid director — the plan suggests a salary between $50,000 and $75,000. The entity should also have a board of directors, professional staff, various committees and volunteers, the plan states. The suggested funding would be split between the city, Natchez Inc. and the county, with the first two groups bearing most of the cost.

The plan also highlights other implementation considerations such as necessary zoning changes and financial incentives for projects.

But before the city gets to that stage, the public must first give its two cents on Tuesday.

“I want to make sure that Tuesday night, we have a packed house,” Grennell said.

The master plan draft is currently available for viewing at www.for–natchez.org.