Lock down over at Natchez High campus; threat of guns on campus unfounded, sheriff says 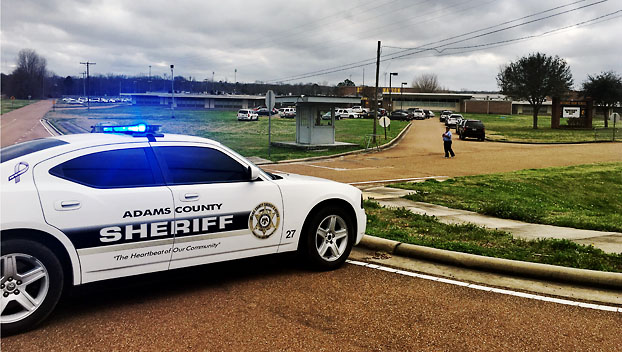 Natchez High School was placed on lockdown early Tuesday morning after an incident at the school.

10 A.M. UPDATE — Natchez High School has been given all clear. Natchez-Adams School District Superintendent Fred Butcher said the school received a threat that caused officials to put the school on lockdown.

Adams County Sheriff Travis Patten confirmed a gun-related threat on the campus was reported but that no weapons were found on campus.

The campus is no longer on lockdown.

NATCHEZ – Natchez High School was apparently put on lockdown mode just after 8:30 a.m. today after the report of an incident at the school.

Natchez Police Department officers and Adams County Sheriff’s Office deputies were on scene at approximately 8:45 a.m. Additional officers headed to the scene were called away a short time later.

The nature of the lockdown was uncertain. Police officials said they had just received the call, but had not accessed the situation yet.

The student, Curtavius Knight, 18, was arrested on charges of simple assault, disorderly conduct and disturbing the peace.

Knight was released on a recognizance bond. The security officer said Knight made threats to both the officer and school administrators. It is unclear whether the two incidents are linked.

This article will be updated as more information is made available.