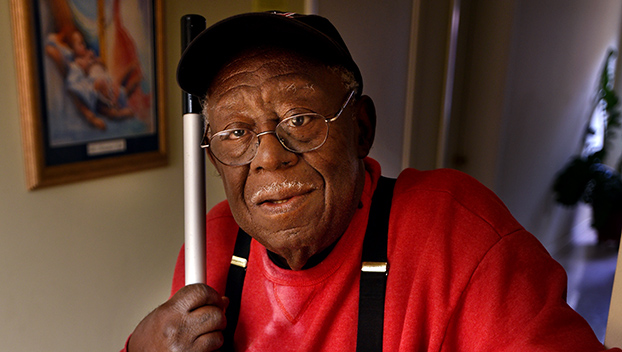 NATCHEZ — Isaac Woods spent his 85th birthday doing what he has done all his life.

When The Dart landed Tuesday on Grace United Methodist Church, Woods was mopping floors and collecting trash where he works part time as a janitor.

“I don’t have no problem with it,” Woods said. “I can pick up a few bucks that way. I do the whole church — whatever has to be done.”

Woods works most mornings during the week and also on Saturdays. He comes in to clean for other special events such as funerals, and has been doing so for the past 11 years.

“Whenever we need him, he’s here,” church secretary Darla Tippitt said. “A lot of the times, it’s just me and him.”

Working at the church isn’t the first time Woods has been available to lend a hand, either.

“I don’t have no problem with work,” he said. “I’ve been working ever since I was 6 years old. My dad had a farm, and I worked there until I was 12. I just did everything that I was capable of doing.”

For the past 22 years, Woods has been retired from his career working for many of the Chicago-area screw manufacturing companies.

“All automotive, military, aerospace — anything that had to be made, I could make it,” Woods said.

Over the years, Woods’ work ethic has even spread. With children in occupations across the board, Woods tallies seven grandchildren and seven great-grandchildren.

“I have one son on the Chicago Police force as a detective, another one who is an electrical engineer and a daughter who is a school administrator,” he said.

Overall, Woods said his commitment is a blessing.

“There is no secret to life,” he said. “Just keep living, because you don’t have anything to do with it. God has blessed me, and I’ve taken it.

“I know I’ve lived a very blessed life. Without God, I wouldn’t be here.”

Though Woods admitted he loves to work, there is one thing he chose as his favorite part of it all.

“The best part is getting a check,” he said.