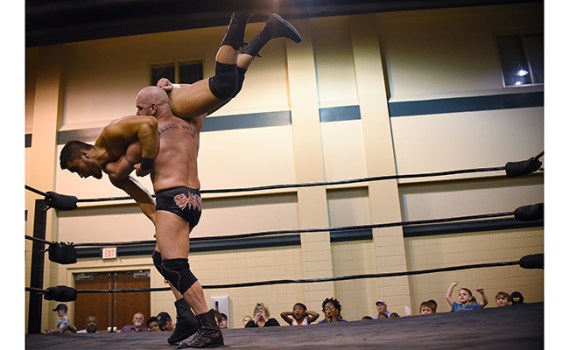 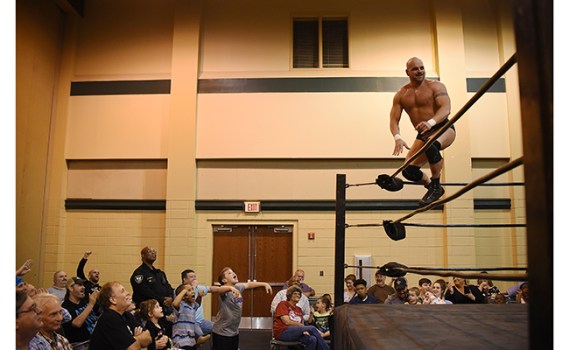 John Saxon crouches on the second rope as he entertains the crowd Saturday during Bayou Independent Wrestling: Collision Course at the Natchez Convention Center. (Nicole Hester | The Natchez Democrat) 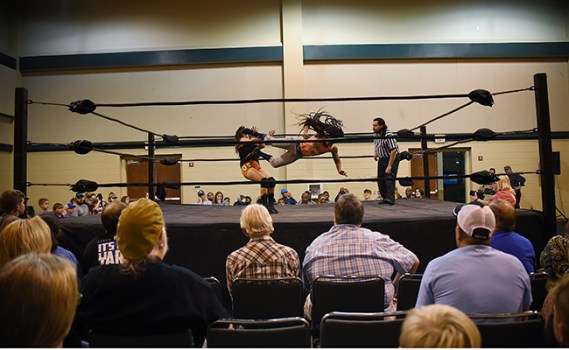 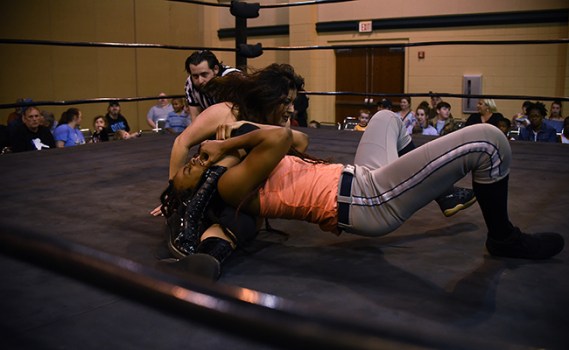 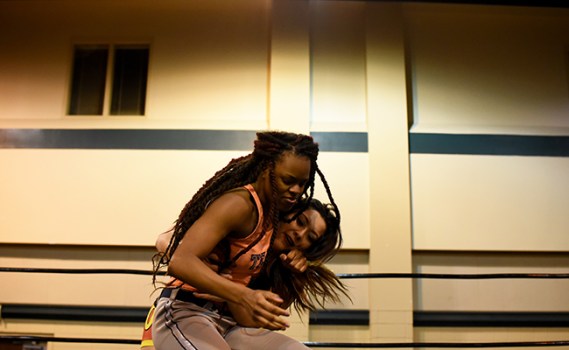 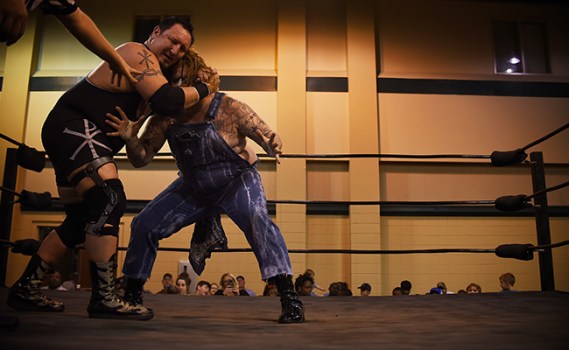 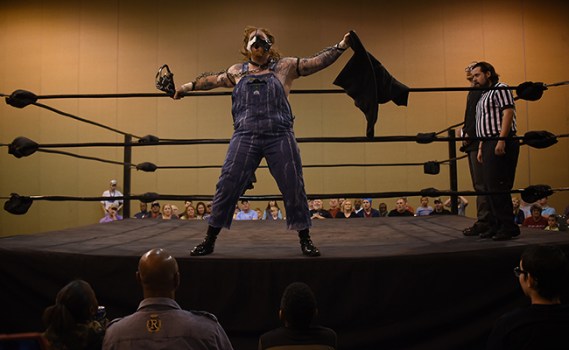 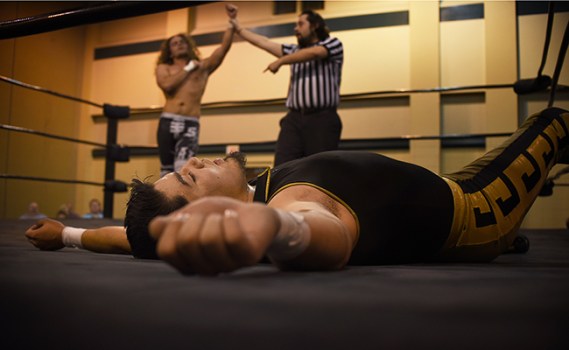 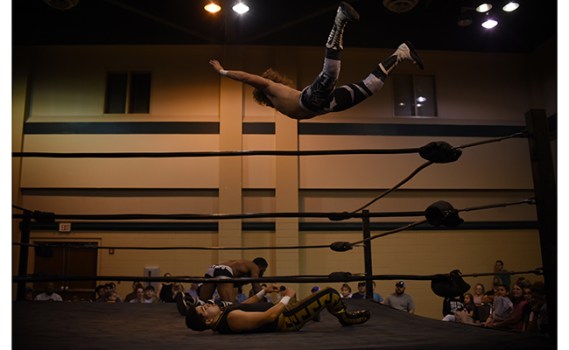 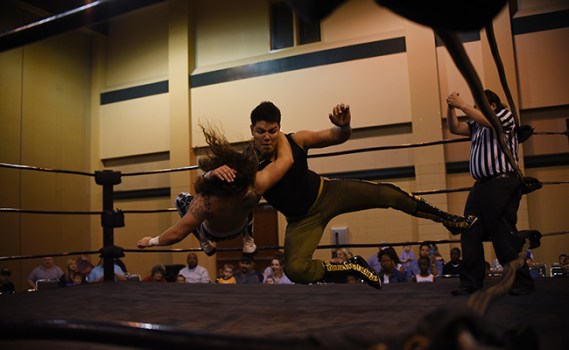 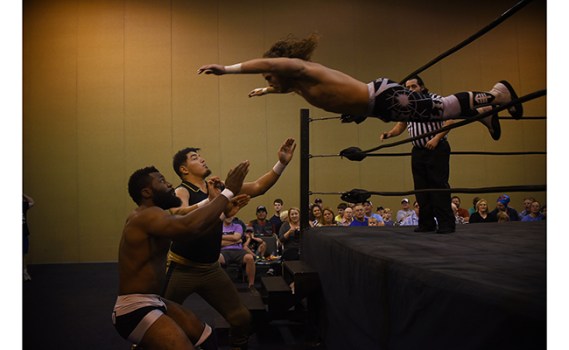 NATCHEZ — John Saxon took a deep breath and made his entrance.

Immediately, the 200-plus fans in attendance for Bayou Independent Wrestling: Collision Course Saturday at the Natchez Convention Center erupted in cheers. With those screams of joy, Saxon felt at peace.

“There is a difference between sports entertainment and pro wrestling,” Saxon said. “Pro wrestling is the grass roots. I’ll actually quote Paul Bearer, many years ago he said, ‘The Independences are the grassroots of wrestling.’ If the roots die, the plant dies.”

For Saxon, Natchez is considered one of those roots.

Bayou Independent Wrestling is no stranger to Natchez. The promotion ran shows from 2006-2013 at Margaret Martin Gymnasium. However, it stopped coming to Natchez due to the promoter, Josh Newell, getting a new job. Yet, about six months ago, the event was revived and Newell knew it had to make its return to the town.

“I loved this town,” Newell said. “I loved the food, the people. This was one of the first towns I wanted to come back to. This was our first time in the convention center, but I loved it.”

Not only did Newell enjoy the promotion’s return to Natchez, but so did the fans.

From the first match to the main event, the crowd was into the show. Kids of every age were yelling at whichever wrestler they despised when they were beating down the crowd favorite. That type of energy makes the event enjoyable in Newell’s mind.

“I love Natchez,” Saxon said. “I’ve performed here on and off for many years. It’s one of those what we call smart market towns that doesn’t forget. They remember the guys even if you haven’t been there in a year or two. Tonight was the first time I’ve been here in many nights and I got a really good applause from the fans when I came out.”

Saxon has a lot of credibility to his name to give such praise to Natchez, considering he has wrestled worldwide for a variety of promotions.

The nearly 30-year veteran of the trade has performed in places in Asia and Mexico and has worked for Impact Wrestling when it was called Total Nonstop Action, WWE, and was even offered a contract from World Championship Wrestling when it was still in business. Plus, he has worked with guys like former WWE Champion Jinder Mahal, WWE NXT superstar Ray Rowe and former ROH Champion Jay Lethal.

“I remember when (current WWE Champion) AJ Styles started,” Saxon said. “I just remember thinking, this guy could be a star and naturally, you see where he is now.”

While Saxon has seen success at the top, he still loves to perform at shows like Bayou Independent Wrestling.

He doesn’t wrestle full-time like he used to, but he still averages two-to-three shows a week depending on his schedule. Yet, it is because of the grassroots atmosphere that drives him to continue to compete.

“I love the live audience,” Saxon said. “I still love to perform and there is just something about grassroots wrestling fans are just my favorite.

“Here in the last few years, I have seen a resurgence of live audiences going to independent wrestling.”

Saxon credits the revival of the independent wrestling scene due to the abundance of talent. He raved about guys like Max Castellanos — who Saxon wrestled Saturday night — and Terrale Tempo! — who also competed on Bayou Independent Wrestling show card.

Natchez will get another look of those upcoming talents Saxon talked about when Bayou Independent Wrestling comes back on Aug. 10. And, the promotion can’t wait to return.