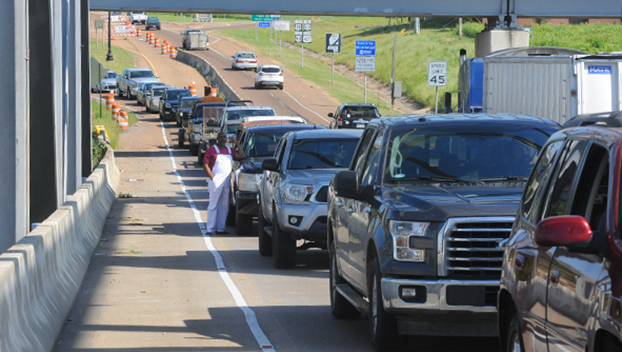 A three-car wreck on the westbound lane of the Mississippi River bridge stopped traffic for approximately an hour Wednesday afternoon. (Ben Hillyer / The Natchez Democrat)

VIDALIA — A three-car pile-up on the westbound side of the Mississippi River Bridge on Wednesday afternoon brought traffic to a standstill for approximately an hour, officers say.

Vidalia Police Chief Joey Merrill said the accident occurred when a driver braked unexpectedly, causing two cars behind them to crash into them.

Merrill said no injuries occurred in the accident, and no arrests have been made Wednesday evening.

Merrill also said the incident caused traffic to be backed up all the way to Homochitto Street, approximately 2 miles from the bridge.

Though originally reported to be a five-car accident, Merrill said upon investigation, officers learned there were only three cars involved.

NHS student’s passion for film leads to many accolades