Inmate convicted in triple murder could get parole 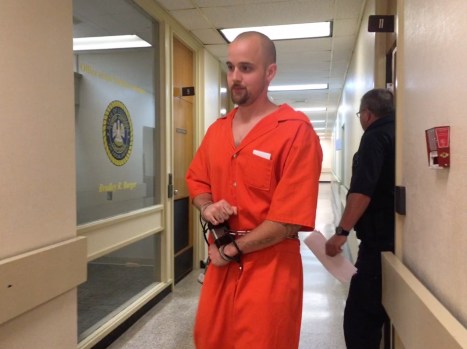 Connor Wood, convicted of the murders of his parents and friend in 2008 at 15 years old,exits the Concordia Parish courtroom Thursday after a hearing concerning his eligibility for parole. (Clara Turnage | The Natchez Democrat)

VIDALIA — Judge John Reeves recused himself Thursday from a hearing that could allow a man convicted of triple homicide to be eligible for parole.

A jury convicted Connor Lane Wood in the murder of his mother, father and a childhood friend in April 2008.

A 2016 Supreme Court ruling, however, held that mandatory life sentences without the possibility of parole for juvenile offenders are unconstitutional — retroactively calling into question approximately 300 juvenile convictions in Louisiana, including Wood’s conviction.

Brad Burget, district attorney for Concordia Parish and other parishes in the region, said the purpose of Thursday’s hearing was to determine if, at the end of Wood’s mandatory 25-year sentence, the now 26-year-old could become eligible for parole.

“This hearing will not determine whether he is guilty — that has been determined,” Burget said in an almost empty courtroom Thursday.

Burget said though many of Louisiana’s juvenile convictions will become eligible for parole, the “worst of the worst” would maintain their life sentences.

“He is among them,” Burget said. “The people who loved him most in the world, he killed them.”

During Thursday’s hearing Wood’s attorney, Paul Lemke, said Wood requested Reeves recuse himself on the grounds that Reeves had been an assistant district attorney at the time of Wood’s conviction.

Reeves agreed to recuse himself, though he admitted he was reluctant to do so.

“I’m somewhat hesitant,” Reeves said in the courtroom. “But I don’t want to give the appearance of impropriety.”

The determination will pass now to Judge Kathy Johnson, though no date for the hearing has been set.

The jury convicted Wood in 2008 of fatally shooting his mother and father more than 15 times in the face, back and upper body as they lay in bed on March 14, 2007.

Wood was also convicted of fatally shooting Matthew Whittington, a 16-year-old neighbor, on the same night.

The circumstances of Whittington’s presence in the house were murky.

In one videotaped confession Wood blamed his parents’ murders on his friend; in another, Wood said the two boys acted in concert.

In both confessions, however, Wood admitted to killing Whittington.

Judy and Dennis Whittington, Matthew’s parents, were among the few spectators in Thursday’s hearing.

For the majority of the hearing, Judy Whittington looked down at the red carpet of the courtroom.

It was the first time she had been in the same room as Wood in almost 10 years.

“I’ve seen him since he was 4 years old,” Judy Whittington said as she sat outside the courtroom waiting for the hearing to begin.

Whittington said the Wood family were neighbors and that Connor Wood had grown up just a few hundred yards from their house.

“We came today to make sure he stays in prison,” Whittington said. “Connor Wood should be kept in prison for life.”

Wood entered the courtroom slowly, shuffling with the shackles on his ankles.

After 10 years in Angola, Wood has grown into a tall, slender man. His hair is shaved close to his head and a goatee frames his mouth.

On his right hand, the letters “LOST” are tattooed across his knuckles.