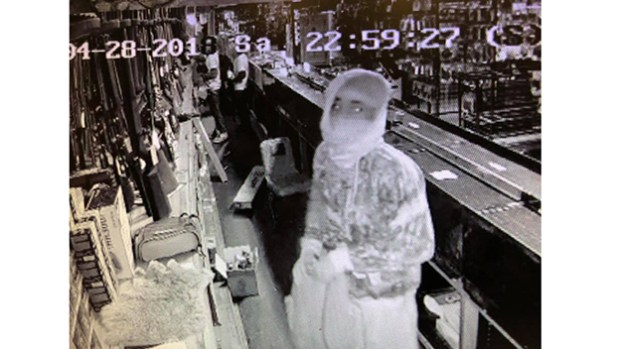 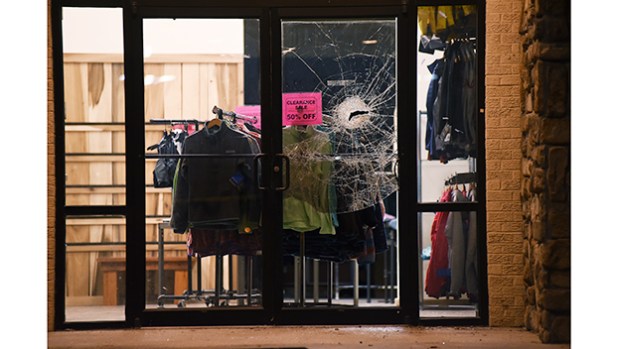 The glass entrance door is shattered after burglars attempted to break the glass with thrown bricks. (Nicole Hester | The Natchez Democrat) 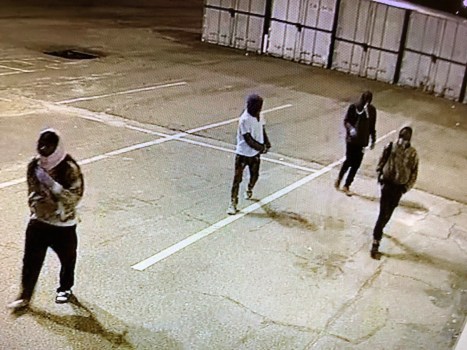 NATCHEZ — Four or more individuals are wanted in connection with the Saturday night burglary of Sports Center on Seargent Prentiss Drive.

The hooded figures begin throwing brick after brick at the front doors of the business. After that did not work, store owner Wyatt Craig said the burglars went to a second door and successfully broke in.

Inside, Craig said the burglars took several firearms, though Craig said he could not give an exact count of the missing guns.

“They knew exactly what they were looking for,” Craig said. “They must have been scoping the place out. I’ll be watching camera footage all (Sunday).”

The doors, Craig said, are difficult to break — a layer of hard plastic divides two panes of glass.

By the time police arrived on scene, the store was empty and a layer of glass covered the ground before each of the doors. In front of the front door, which the burglars could not get through, lay a few shattered bricks as well.

An alarm is blaring in the video, though it does not faze the burglars.

Craig said the car captured on footage was a black Honda Accord with no plates. Though he was not sure, Craig said the vehicle looked like a 2005 model.

Natchez Police Chief Walter Armstrong said police are investigating a connection between this burglary, the burglary of the Natchez Pawn Shop and the burglary of Old River Gun in Ridgecrest — all of which happened in the last four days.

“We’re looking at it from all angles,” Armstrong said. “This is a joint investigation. We have not brought charges as of yet.”

Armstrong said he expects arrests to be made in the coming days.

Craig said he was appreciative of the police department’s response, but that he felt little good could come of an arrest until harsher sentences are passed at the judicial level.

“It starts and ends with the judges,” Craig said. “Until judges decide they want to do something, the police’s hands are tied.”