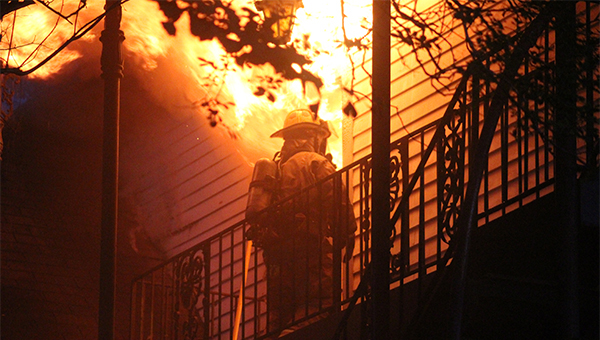 A Vicksburg firefighter stands on a second-floor balcony as flames break through a door Tuesday night. (Vicksburg Post)

VICKSBURG — Seventeen hours after the initial call went out, units from the Vicksburg Fire Department were finally able to leave the scene of a fire that destroyed a two-story home in the 2400 block of Cherry Street Tuesday night.

The initial call went out around 7:30 p.m. Tuesday and units were finally able to contain the majority of the flames around midnight, VFD chief Craig Danczyk said, but they remained on scene until Wednesday around 12:30 p.m. monitoring the structure and putting out hot spots.

“I left around midnight and the fire was very manageable at that point. It was just a few hot spots,” Danczyk said. “We did rotate different engine companies, especially those that were not directly involved in firefighter activity at the beginning of the incident to provide fire watch. We rotated them every couple hours. When the shift changed at 7 a.m., we had crews on scene for a good five hours maintain conditions.”

Peter Meyers, who has owned the home and lived there for the last couple years, was at church in Bovina attending bible study when the fire started. His dog, a half lab/half Catahoula, was inside the house, and Danczyk was able to confirm Wednesday that the dog died in the fire from apparent smoke inhalation. Firefighters were able to locate the body, although he didn’t know where in the house the dog was found.

“My biggest sadness is losing my dog,” Meyers said. “She was my little shadow and I loved her a whole lot. Actually seeing her body covered in ashes, soot and grime was pretty traumatic.”

The home was built circa 1885 and originally owned by Charles E. Wright, who was the editor of The Commercial Herald at the time, said Nancy Bell with the Vicksburg Foundation for Historic Preservation.

Prior to Meyers buying the home, it was owned by Lesley Silver, who owns the Attic Gallery. She lived there for 34 years after moving in Jan. 7, 1977.

“It was like the past of my family was going up into the sky. That house helped form who I was,” Silver said. “Living in that house was an adventure because it is an old home and it has warts and creaks and animals running up and down inside the walls. All of that sort of adds to it. It is never dull, and I feel like the house was also important to the neighborhood.”

Danczyk said VFD’s fire investigator and the state fire marshal’s office were able to assess the home Wednesday and determine that the fire was likely caused by an electrical failure.

Brian Patterson, who lives behind the impacted home, said Tuesday evening that he saw sparks and flames coming from the circuit box behind the home and called 911.

“At this time, we believe the electrical service failed creating a tremendous amount of heat,” Danczyk said. “Then subsequently the wood surrounding that service caught fire, then the walls and it crawled its way to the attic space on the second floor.”

Danczyk deemed the house a total loss due to the extent of damage and Meyers said that is an assessment he agrees with, although he is waiting to speak with an expert. Meyers added he is hopeful he will be able to save some items from inside the house as, “Some of the things that were in cabinets seemed to have come through pretty well and that’s good. I have not been able to get upstairs to see some things I hope are still intact, but I don’t know.”

Following the destruction of his home, Meyers said he has received an outpouring of support from his church.

“I’ve been through worse and I will pick up the pieces and go on with my life. That is all I can do. My church has been wonderful and I have had so many offers of help. You’ve got to love Vicksburg,” he said.