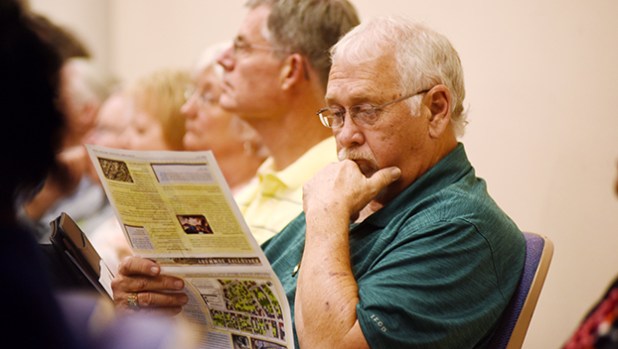 Jimmie Moore looks over the final plans for the downtown revitalization plans during a meeting of the Natchez Board of Aldermen Tuesday. (Nicole Hester / The Natchez Democrat) 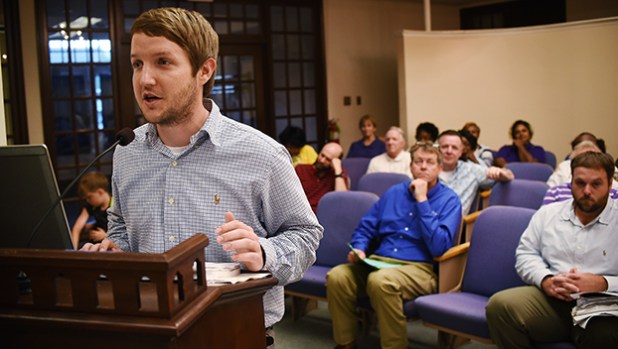 NATCHEZ — Downtown Natchez officially has its new master plan after nearly two decades without an update.

City leaders unanimously approved the downtown revitalization plan, which focuses on developing the bluff and the MLK Triangle area, which consists of Martin Luther King Jr., Saint Catherine and Franklin streets. The plan also includes the idea to develop an arts district on the block of Commerce Street between Main and Franklin streets.

More than a year and a half of work by local nonprofit FOR Natchez and consultant group The Walker Collaborative had been building up to Tuesday’s culminating moment.

“After all the hard work, I am so appreciative of your steadfast support and guidance,” said FOR Natchez President Chesney Doyle.

The plan’s approval replaces an outdated portion of the city’s comprehensive plan that had not been touched since 1999. These plans are supposed to be updated every three to five years, officials have said.

City Planner Riccardo Giani presented a boiled-down version of the 190-page plan, highlighting key components such as maintaining historic properties that are deteriorating, establishing a cultural heritage district downtown, developing the old Broadway Street Depot into a restaurant-like facility and giving new life to the Ritz Theatre on Commerce Street.

After the plan received unanimous approval from the Natchez Board of Aldermen — leading to applause from the roomful of attendants  — Natchez Mayor Darryl Grennell immediately brought up the next phase: implementation.

Implementing these ideas will include the hiring of a “Main Street Director” to lift the downtown economy, seeking funds for infrastructural upgrades, establishing a project for the Ritz Theatre and moving forward with the depot project, Giani said during his presentation.

The heavy lifting for the project, Doyle told the board, is about to begin.