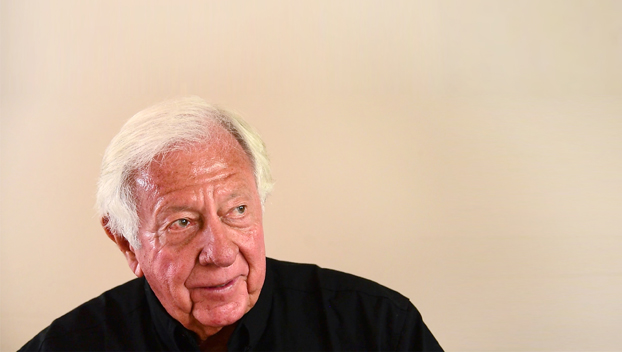 NATCHEZ —Half a century ago, a Natchez icon prepared to make his indelible mark on this city.

July marks the 50th anniversary of former Natchez Mayor Tony Byrne taking office, which he would hold for the next two-plus decades.

Today, Byrne said he could hardly believe five decades have passed since he was sworn in.

“I thought, ‘Has it really been 50 years?’” Byrne said Thursday.

Entering office during tumultuous times, Byrne would face a number of challenges, primarily leading a city during the height of the civil rights movement.

But well before then, an unsuspecting Byrne was being groomed as a future public servant by way of his first love — sports.

A prominent athlete through high school and college, Byrne said he learned to appreciate teamwork and collaboration through sports, later translating into a willingness to work with others in politics.

“I think it (sports) had an awful lot to do with it,” Byrne said.

While many learn the lesson of teamwork through team sports, Byrne and his college basketball teammates went through a not-so-common ordeal that would shape Byrne’s entire outlook for the rest of his life.

While playing for Mississippi State University in the mid-1950s, Bryne recounted traveling for a tournament in Indiana, where the team encountered what brought their trip to a screeching halt.

“This year, we were playing against some black ballplayers, and we were in the finals,” Byrne said.

The team’s coach informed the athletes that they would not be playing that night, because the Legislature demanded the team return home after discovering the opposing team had black players. Byrne said despite protests from his teammates and him, the coach insisted and the team loaded back onto the bus.

Getting out of there, Byrne said, took something just short of an act of Congress. After prodding from reporters surrounding the team’s bus, Byrne said, an assistant coach took a swing at a member of the press.

Angry fans upset that Mississippi State refused to play pelted the team’s bus with rocks. The bus driver had his license taken, and the players and staff endured a tense moment before finally the coach worked with the governors of both states to get the team out of there, Byrne said.

That moment, Byrne said, extended far past basketball. It showed him what sort of challenges society faced, and though he did not know at the time, he would later work to alleviate these issues in Natchez City Hall.

“It was such an experience that the color of somebody’s skin could make that much difference,” Byrne said. “I think it served to help me a whole lot in politics.”

Years later, Byrne began a short stint as a city aldermen. Though he admittedly had little interest in entering politics at first, Byrne became convinced to run in a special election after retiring alderman — Tom Reed said he wanted Byrne to fill his spot.

Beforehand, Byrne said he went around speaking at black churches after being recommended to do so.

When election time came, Byrne was losing by a wide margin. In that time, citizens from all wards could participate in the election, and Byrne was not having much success in wards filled mostly by whites. What did not help, Byrne said, is that he faced opposition from the Ku Klux Klan.

But things turned around quickly when results from predominantly black precincts rolled in.

“We beat him by 1,000 votes,” Byrne said. “That was the first time that the blacks had had any sort of black power at the polls, per se.”

A couple years later, the same storyline followed the mayoral election. In an extremely tight race, the minority vote is what ultimately pushed Byrne through to city hall by a narrow margin of 252 votes.

Just in his early 30s, Byrne was already primed to put his stamp on Natchez.

Over the next 22 years, Byrne said his greatest challenge would also become what determined his legacy.

Right after being elected in May 1968, Natchez was under martial law following a riot, Byrne said. When coming into Natchez from Lake St. John, Byrne said he and alderman Hall Wilson received a less than cordial greeting.

“We came across the bridge, and they had guns on us,” Byrne said. “Of course I’m in shorts, I haven’t shaved, I haven’t done anything, and Hall introduces me as the new mayor of Natchez. I think they looked at me like, ‘Uh huh, I’m sure he is.”

When Byrne arrived at City Hall, he said some of the black leaders heading a boycott did not want to meet with the current mayor, who had about a month left in his term, but Byrne instead.

Byrne said he could not calm them down, but his friend, activist Charles Evers, helped cool things off. Byrne credited Evers as being a great teammate in helping to keep the city calm.

The turmoil had latched on to Natchez, and the obstacles were obvious. Still, slowly but surely, Byrne said he and the board of aldermen were able to make great strides.

A concerted effort began to establish a more diverse municipality. Byrne said he brought in the first black public employee in city hall and worked further to integrate city government throughout his tenure.

With some help, Byrne worked to ease racial tensions, at least to the point where every decision did not lead to either a white or black boycott.

His ambitions, however, provoked some pushback. One big concern was the Ku Klux Klan, from which Byrne said he would receive threats.

He told a story of how, though he did not know until later, police would place a piece of tape under the hood of his car to ensure that no one tampered with the vehicle overnight.

“They’d come check it in the morning to see if somebody had popped the hood to put a bomb underneath Byrne said.

Had he been aware, Byrne said, the notion of potentially having his car rigged would have terrified him.

But through it all, Byrne bridged the gap. Though eliminating racism outright, as he said, was not possible, he now feels that the strides he made are the crowning achievement of his tenure.

Now 80 years old, Byrne said he sees a few hurdles for Natchez — some that will be surpassed with the passage of time — but also some that remind him to a lesser degree of issues he saw during his time as mayor.

For one, consolidation is necessary for progress, Byrne said.

“Until we consolidate, I don’t think we can — there’s always a conflict between the city and the county.

But the former mayor also sees a lack of what he emphasized so greatly — teamwork.

Byrne said he has great admiration for Natchez Mayor Darryl Grennell and asked the public to put their faith in him. Aside from the citizens, however, the Natchez Board of Aldermen must do the same, he said.

Additionally, Byrne said he believes recently a regression in race relations has occurred in terms of putting skin color aside when making decisions, something Byrne said he worked hard to accomplish.

Even so, looking back upon the last 50 years, Byrne said he recognizes Natchez has encountered numerous “ups and downs” and has always found a way to manage. While noting the challenges, he encouraged Natchezians to remain optimistic, specifically noting that opportunities will always be available with the mighty Mississippi River at the city’s doorstep.

“I think as long as we remember that we own the river, and we try to put our face back to the river, I think that’s our future,” Byrne said. “It’s been our past, and I think it’s our future.”

And even while celebrating the past, Byrne said he is still looking forward and will be around to see it through with the rest of Natchez.

“I’m here ’til the end, whenever that’s going to be,” Byrne said with a smile. “I’m not going anywhere.”