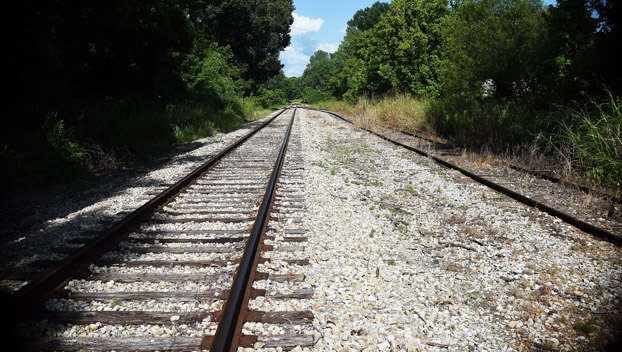 Work on Natchez Railway lines between Natchez and Brookhaven should be completed by this time next year, the project’s manager said. (Nicole Hester, The Natchez Democrat)

Railway work should be completed in a year

NATCHEZ — A multi-million-dollar project to revamp Natchez’s lone railway should be completed approximately this time next year, the project’s manager said.

The 65-mile Natchez Railway that connects Natchez and Brookhaven is undergoing multiple upgrades in the interest of economic development. Four projects fall under the blanket of a $10.7-million U.S. Department of Transportation TIGER Discretionary Grant, to which the Natchez Railway added approximately $3.6 million for a total of $14.3 million.

That $3.6 million comes out to approximately a 25-percent match, which Natchez Railway project manager Ed Landreth said was crucial to getting the grant.

Comprising these efforts are upgrades to five currently insufficient steel-truss bridges, including one at Saint Catherine Creek, rehabilitating more than 20 timber bridges, replacing a failed culvert at a site in Cranfield and installing signage and other improvements to upgrade public at-grade crossings along the 65-mile stretch.

Though much work remains and hardly any money has been drawn from the grant, Natchez Community Development Director James Johnston said, most of the groundwork has been laid.

All projects are under contract except for the public crossings work, and the railroad company is currently working with the City of Natchez to seek engineering firms for that portion, Natchez Railway project manager Ed Landreth said.

“That’s the only project I don’t have really underway,” Landreth said.

Koppers are under contract for approximately $6.5 million to handle the steel-truss bridges portion, while Simmons Railroad Group will handle the timber bridges rehabilitation for approximately $880,000 and local company Dozier LLC. will install the Cranfield culvert for $180,000. Landreth had no estimate for what the remaining project will cost, and he also added that those figures could change as additional work is deemed necessary.

The bulk of this project, Landreth said, is to make the railway more capable in the hopes of bringing more attractive infrastructure to industries. The bridgework would essentially make the rail meet requirements to handle heavier loads — from the current 263,000-pound maximum gross weight up to a 268,000-pound max. Currently, some railcars must be partially loaded to keep the weight down to levels the current bridges can safely handle.

“Right now, this railroad is at the bottom of what we’re looking at in the industry right now as a 263,000-lb railroad,” Landreth said.

Currently, the beam rail line meets the qualifications for beam strength to handle increased loads, but the bridges are not up to standard, Landreth said.

“One, the steel bridges were built in 1906,” Landreth said. “Nobody anticipated these types of loads. We’re looking at basically being able to handle a 100-ton railcar.

As for the wooden bridges, Landreth said deferred maintenance by previous owners has left these bridges lacking in terms of handling this heavier freight. That work, Landreth said, could be done by the end of October.

The project in its entirety was initially supposed to take three years. Fortunately, Landreth said, the contractors have sent out twice the workforce as initially planned, expediting the process and reducing the timetable to by the end of next summer, depending on weather.

At that point, Landreth said hopefully these improvements would make not only the rail, but also the Natchez-Adams County Port more attractive by enabling companies to transport more materials.

“If you can carry more product in a railcar, your unit price goes down,” he said. “That’s the real attraction for industries and the port.”

Landreth credited the board of aldermen for sponsoring the grant and Johnston for his work in attaining the grant, saying that none of this work would be possible without them.

While the city was originally intended to be the lone sponsor, Adams County later joined because of concerns about assuming maintenance liability should the railway’s owners ever go out of business or file for bankruptcy.

NATCHEZ —Half a century ago, a Natchez icon prepared to make his indelible mark on this city. July marks the... read more