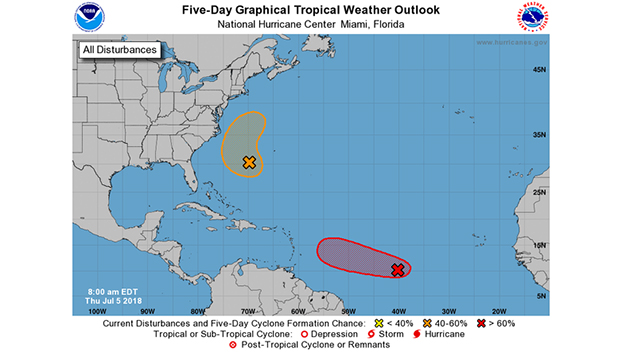 Forecasters: Tropical depression likely to form in Atlantic, but not affect Gulf Coast

NEW ORLEANS — Since Sub-tropical Storm Alberto in late May and early June, tropical activity in the Atlantic and the Caribbean has not been a major factor for the Louisiana and Mississippi Gulf coasts.

Hurricane forecasters said Thursday morning that a tropical depression has a high chance of developing in the next 48 hours in the Atlantic but will likely not pose a threat for Louisiana or Mississippi.

As of 7 a.m., the “well-organized” system was between the Cabo Verde Islands and the Lesser Antilles, the National Hurricane Center said. Forecasters described it as a small area of low pressure and a tropical wave.

The disturbance is expected to move west at 15 to 20 mph over the Atlantic Ocean. It has a high chance (70 percent) of developing into at least at tropical depression within 48 hours and five days, the National Hurricane Center said.

However, the system is expected to fall apart before it reaches the Lesser Antilles and not be a threat for the Gulf Coast.

“Even if it develops, conditions are expected to become unfavorable as it nears the lesser Antilles, with all model guidance currently suggesting it will degenerate into a tropical wave as it moves into and through the Caribbean,”  forecasters said.

VIDALIA — Four heart attacks would not keep Kenneth McGee from enjoying his Fourth of July on the Vidalia... read more