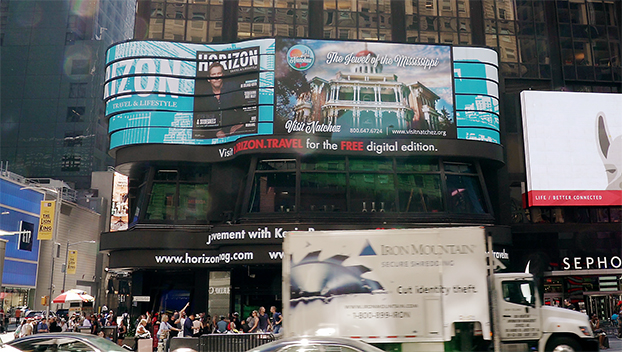 A 5-second advertisement from Visit Natchez — featuring the antebellum house Longwood and red poppies along the Mississippi River — was shown on the billboard above ABC’s Good Morning America studios more than 120 times between June 29 and July 4.

As to how the ad got there, Natchez tourism director Jennifer Ogden-Combs said, it was pure luck.

“Horizon Travel and Lifestyle Magazine approached us about how they had an open space for an advertisement in their July edition,” Combs said. “The magazine heard of Natchez, but didn’t really know that much about the area. So after seeing the diverse history and offerings of Natchez, they asked if we could do an editorial. After submitting the editorial, they asked if we could expand on it. In the end, Visit Natchez got a half page editorial and ad.

“After they were done reading our editorial, they asked us if we wanted to be featured on their digital billboard that is shown in the background of ‘Good Morning America.’ How could we say no?”

Combs said it was cool to see the Visit Natchez-Times Square pictures she received from friends and from workers for the magazine.

“You could see people pointing up at the ad in the pictures I have been receiving,” Combs said. “Millions of people visit Times Square. We are very excited that we could expose people there to Natchez because they are probably visitors to that area, too. We got very, very lucky with this.”

Not only was the Visit Natchez ad displayed in Times Square, but it was seen in an insert in The Wall Street Journal as well.

Combs said the total cost for the entire package — half page ad, half page editorial and the Times Square advertisement — was $3,400, and she said it came at a reduced price.

“Such an ad would normally be in the five figures,” Combs said. “A lot of people watch ‘Good Morning America,’ so the possibility to being on that show was a great opportunity. Plus, being featured in Times Square during the holiday weekends can be huge as well because that is when a lot of people visit that sort of attraction.”

Combs said the space must have become available at the reduced price because another advertiser dropped out or other reason and through a stroke of luck the magazine contacted her.

“We have worked really hard to get Natchez in front of as many people as possible,” Combs said. “You never know quite when it will pay off and this time it did.”

Combs said what was being offered was too hard to pass up.

“We will try everything to reach people that we haven’t before if it’s within our budget because Natchez is so unique. But when I saw the ad, I was like, ‘Oh my gosh, this is amazing.’ I’m hopeful that ad got people interested in visiting Natchez.”

VIDALIA — Four heart attacks would not keep Kenneth McGee from enjoying his Fourth of July on the Vidalia... read more