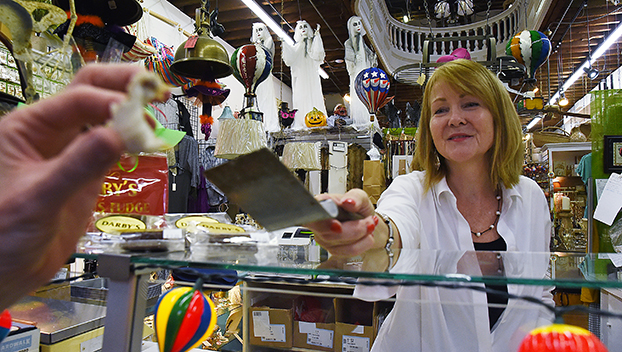 Darby’s furniture store owner Darby Short offers a sample of her fudge from her store on Main Street. (file photo)

The recent South Dakota vs. Wayfair Inc. ruling is already being implemented nationwide, meaning consumers who shop online will be charged their state sales tax, even if the retailer does not have a physical presence in the state.

Meg Bartlett, associate commissioner at the Mississippi Department of Revenue said the revenue that is collected by the state as a result of the ruling will not be disbursed to cities yet.

Instead, the taxes collected from online sales will go directly into a general fund, and the department of revenue is already working with online retailers to set up that taxation process, she said.

“The governor will have to call a special session before any of the money can be used elsewhere,” Bartlett said. “It has to go through the legislative process just like everything else.”

Although city officials will not be receiving a slice of the $50-million pie — the estimated amount of revenue that Mississippi Attorney General Jim Hood said online sales will generate in the first year after this law has passed — local business owners have expressed optimism, saying that some consumers may turn to their stores when online shopping is less affordable.

Gail Guido, owner of Silver Street Gallery and Gifts, said she is thrilled the law is being implemented.

“I’m happy about it,” Guido said. “It’ll help keep shopping local. The convenience of just going online will continue, but (the law) will help a little and I’m thrilled.”

Darby Short, owner of Darby’s furniture store on Main Street, said while she hopes the Wayfair ruling will make a difference, the convenience of online shopping from home would not fully disappear.

“When they gave a reprieve on the Internet for sales tax, that was given without knowing that it would hurt brick-and-mortar stores nationwide. What this does is level the playing field. “I can only hope that it will make a difference. We’ve watched so many brick-and-mortar stores go down due to Amazon purchasing. Our downtowns are very important to us (nationwide). We can only hope this will make people say, ‘Wait, I’m being charged sales tax, and I’m paying for shipping. Let me check and see what’s available in town.’”

“It puts them on a level playing field with large, out-of-state and international corporations,” Hood said after the ruling. “We attorneys general have been extremely successful in convincing the United States Supreme Court that the United States Constitution protects the states from federal legislative and judicial overreach. I don’t think I have lost on any of these cases where huge international corporations try to use our Congress or federal courts to preempt state laws designed to protect our consumers and state laws.

“I have supported an internet sales tax from the beginning, not only because it will bring an estimated $50 million in the first year for our state, but because this means our local, brick-and-mortar stores are now on a level playing field with businesses that have no storefront in Mississippi.”

Hood said not collecting the sales from internet retailers has had a detrimental effect on brick-and-mortar retailers.

“We live in a digital age, and our laws must reflect that,” Hood said. “Online shopping may be convenient, but it’s had a negative impact on our Main Street merchants who have always been required to charge a sales tax. When our local businesses suffer, so do we. Now, there’s no difference in someone walking into a store to buy shoes and sitting on their couch and doing the same thing from their phone.”