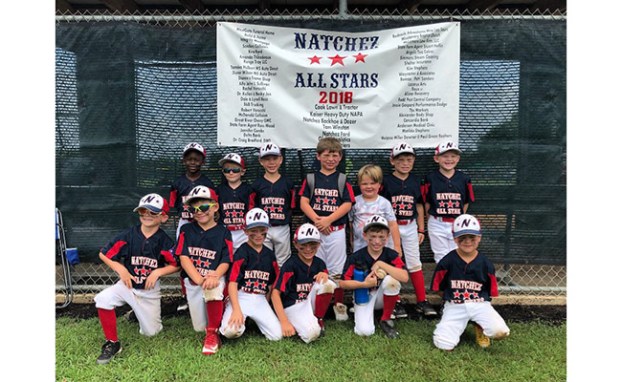 CLEVELAND — The Natchez Dixie Youth 6U all-atars endured numerous weather delays last weekend and ended up with a fifth-place finish out of 12 teams at the 2018 Mississippi Dixie Youth T-Ball State Tournament.

After its first game started at 5 p.m. Friday and was postponed in the top of the second inning due to inclement weather, Natchez defeated the Cleveland Nationals, 17-2.

“That was the toughest tournament I’ve ever been part of as far as the weather,” Natchez coach Doug Atkins said. “We played our second game (on Saturday) at 1 p.m. and we got three innings in before it rained again. We didn’t back on the field until 4 p.m.”

The Natchez 6U all-stars didn’t let the lengthy weather delay bother them as they held off Magee to advance in the winners’ bracket, 11-9.

“We didn’t play our first complete game until the Sumrall game at 8 p.m. That was extremely tough for the kids,” Atkins said.

Playing on a field that Atkins said had six to eight inches of water on it, Natchez fell to Sumrall, 10-4. Atkins said he thought if the field had been drier, the final score would have been a lot closer.

“It should’ve been 6-4 or 5-4. I just wish there would’ve been sunny days on the baseball field,” Atkins said. “That Sumrall team played 20 games before they got to the state tournament. We were the only team to hold Sumrall to 10 runs.”

The Natchez all-stars returned to action at 8 a.m. Sunday lost a heartbreaker to the Laurel Nationals 13-12. Atkins said that was a game his team should have won.

“The Laurel game, we went two innings without giving up a run,” he said. “We lost to the top two teams in the tournament. To finish fifth in our first state tournament, that’s nothing to be ashamed of.”

Atkins said he was proud of the way his team played considering the level of competition and the numerous weather delays.

“We had one of the best teams I’ve ever been a part of. I think they played great. They battled. Everybody hit the ball. Every game (at the tournament) were blowouts but our games because of the defense,” he said.