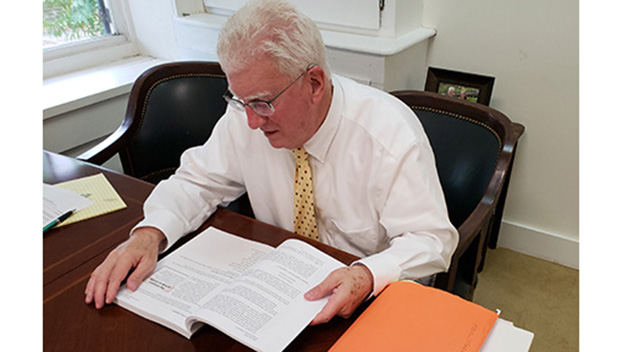 VICKSBURG — A non-denominational jail ministry program is working to create a Christian environment among inmates in prison.

The Kairos Prison Ministry, a Christian prison outreach program, began in 1976 with a three-day “short course in Christianity” inside Union Correctional Institution at Raiford, Florida.

It has grown into an international organization of volunteers serving in more than 400 correctional institutions and 86 communities in 37 states and 9 countries, Costa Rica, Australia, Canada, Dominican Republic, Honduras, Nicaragua, Peru, South Africa and the United Kingdom. There are also programs for parents, spouses and children of inmates.

“Our focus is to build a Christian community inside the prison among themselves (inmates),” said Vicksburg lawyer and former circuit judge Frank Vollor, who volunteers with the Kairos program at the state’s Central Mississippi Correctional Facility in Pearl. There are also Kairos programs at Parchman and the state’s facility in Leakesville.

“We don’t emphasize relationships with us,” he said. “Were on the outside. We’re going to leave and those doors are going to shut. We try to get them to start relying on each other and establish prayer groups inside.

“That’s the whole focus; to get them studying together and praying together back in the zones. We try to get them to develop and to rely on each other. We’re walking into the devil’s playground and we’re trying to fight him on his turf. Most of the men who have been in prisons say they are hell on earth.

“The devil’s got them there and he’s still working on them. We deal with everybody; we want the murderers, the sexual offenders, want everyone. We want the worst, because that’s where you make your changes.”

The program holds weekend retreats with the inmates at the prisons to help them learn about Christ.

“The whole focus of those days is to impress upon them that God loves them. The love of God,” Vollor said. “It’s very simple. We do not proselytize any one faith; we’re prohibited from doing that. We just emphasize the love of Christ.”

During the retreat programs, the inmates are divided into discussion groups that usually include people from outside the prison and a minister.

The program, he said, is structured, and each talk is a build up for the next.

“You kind of walk them through to get them ready for the next one, then you examine God, and we emphasize prayer, study and action.

“We emphasize talking to God. We emphasize increasing your faith by study — read the Bible and other good books — and then we talk about acting out your faith. How do you take this faith out and incorporate it into your life and bring others.”

When the volunteers come to the retreats, he said, they are allowed to bring food for the inmates like cookies and crackers, and a cooked meal prepared by a restaurant.

“When we go in there, we serve them; we’re servants, and that blows their mind for somebody to care for them,” Vollor said. “At first, they’re put off, but then they see we’re sincere; we’re servants of the lord. It’s that way back in the zone. We feed them good meals and we wait on them and do not ask for anything in return.

“We try to build a faith community in the prison we try to impress upon them that God loves them, no matter what they did.”

If there is one obstacle for the volunteers and inmates wanting to accept Christ, he said, it’s the gangs in prison.

The prison gangs, he said, don’t want their members to find Christ.

“It could be a death sentence. We’ve had that situation before; some of these guys in prison are real Christian martyrs, because they’re risking their lives to find Christ.”

People who want to volunteer for the Kairos Ministry must have their pastor’s approval and submit an application to be allowed to participate. They must also sign a faith agreement that the Bible is an authoritative and inspired word in their lives, they believe in the Holy Trinity and that Christ is God; he died and rose from the dead, and friendship with God is a free gift.

They also have to go through training with prison officials on the rules and protocol of the prison — what they can and can’t bring in.

“People participating in the Kairos cannot bring anything into the prison, not even a Bible,” Vollor said. “The way we do get the prisoners Bibles is through the prison chaplain office and get their approval.”

He said being a former judge inspires him to work in the program.

“I know the men; I truly love them. God loves everybody. I spent time with them here (in court).

“I see people I’ve sent to prison every time I go, and that can be a powerful experience — meeting them in the prison on a Christian basis. That plays a lot on my feelings.”

The crime problem, he said, is getting worse.

“We either fix the problem with God, with Christ, or it just grows, and if we don’t deal with the criminal situation, the bad behavior and go to the root, and the root of the problem is the devil. The answer is God and Christ; the Holy Spirit.

From The Vicksburg Post VICKSBURG — Vicksburg will be one of the stops for the Mississippi River Commission during its... read more