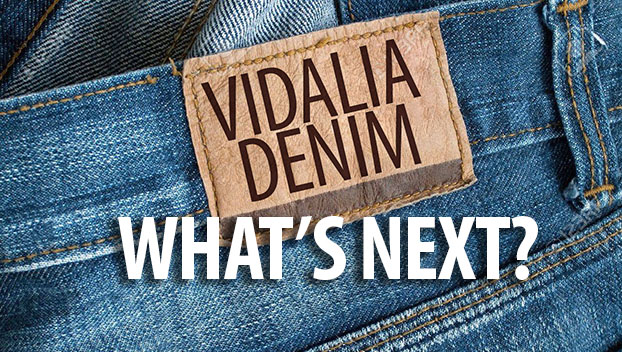 Sunday Focus: What are the next steps for Vidalia Denim?

VIDALIA — Before the newly announced Vidalia Denim Company can start producing denim in the 900,000 square-foot, former Fruit of the Loom property it purchased from the Town of Vidalia last week, the company first has to transform the facility.

“There’s a nine-month plan before we start rolling out any product,” said Dan Thompson, Vidalia Denim’s executive vice president of manufacturing. “As more equipment is rolled in and installed, more people will be employed. … Part of that will be the technical jobs that will help install the equipment.”

Vidalia Denim is currently in the permitting phase that is expected to last two to three months, Thompson said.

Then the company will install a new air filtration system and updated electrical wiring that can support its equipment. The company can then hire workers for equipment installation in the following months.

“We’ll be looking for wide-range of jobs — machinery operator, technical maintenance, electricians, support jobs, handlers and corporate drivers and supervisor and management jobs. … We want them to be certified and workforce ready.”

Vidalia Denim was revealed in a Thursday public hearing to be what Miss-Lou economic development leaders had referred to as Project Blue for more than a year and a half with the promise of bringing some 300 much-needed jobs.

Vidalia Denim plans to spin cotton into denim to be sold to blue jean manufacturers such as Wrangler with a minimum $9 million annual payroll.

“If I can have somebody with a positive attitude, a good work ethic and who is very reliable, they will be very successful with us,” Thompson said. “We can train them … if people want to work, work hard and get paid well.”

Thompson said the company would have a minimum of 300 local jobs with annual salaries averaging $30,000 a year with full health coverage and other benefits. He said the company also would help the local agricultural economy by purchasing cotton from regional growers. In fact, Thompson said, the proximity to delta cotton farming areas made Vidalia a great location for the facility.

“We have been looking for an ideal site for about two years, and the Vidalia site was by far the best site for our project,” Thompson said.

“The available building (the old Fruit of the Loom site) has the existing infrastructure we needed, and when combined with the strong workforce in the region … as well as the close proximity to cotton crops for our key raw material, we knew this location was primed and ready for us to locate this project.”

Vidalia Denim CEO Dan Feibus, former CEO and partner of seven years with Zagis USA in Lafayette, said he has been involved in the textile industry for approximately 25 years.

Feibus received his bachelor’s degree in political science and economics from Swarthmore College in Pennsylvania and is now working with several partners as the CEO of Vidalia Denim, the brand of Vidalia Industrial Facilities.

“I’ve been looking for a place to put an integrated spinning and denim mill,” Feibus said about the company’s decision to locate in Vidalia. “It wasn’t focused on Louisiana, but the opportunity of the building was there … and really what made the difference was the people. … Mayor Buz Craft as well as Heather Malone, and Chandler Russ with Natchez Inc. have been really great. I can’t say enough about them.”

Killebrew Cotton Company of Tchula is one of Vidalia Denim’s many partners, Feibus said.

“Killebrew Cotton Company … will supply a small percentage of our cotton, but they are also contacting other growers in the area,” Feibus said. “They’ll be reaching out roughly within 100 to 200-mile radius of the company.”

“Donnie Wooley spoke at the meeting (Thursday),” Feibus said. “He was a huge part of putting this all together.

“Donnie spent 13 years with the U.S. Department of Agriculture as an interest program specialist,” Mayor Craft said in introducing Wooley at Thursday’s public hearing. “He was also with the USDA rural state office and has been in this business for 21 years.

“Over the course of his career, he closed on almost a $1 billion in USDA loans. Just this year alone, he closed on $300 million.”

Wooley said the creation of Vidalia Denim was a very long process.

“This is a project that has evolved over the course of almost two years now — a $50 million investment here in Concordia Parish,” Wooley said. “Ark-La-Tex … specializes in assisting companies in attaining government entities’ finances for projects such as this.”

Wooley said Ark-La-Tex has known and worked with the principals of Vidalia Denim since 2006 and has invested in successful projects with them in other parts of the state.

“This process has taken a public and private partnership like I’ve never seen before,” he said. “Public in the sense that we have guaranteed finance commitments from the USDA and the U.S. Business Administration, both totaling $30 million of this $50 million project.  It has the participation of credit unions … serving as the sponsoring lenders for this project.”

Wooley said Jefferson Financial Credit Union of Metairie is the lead sponsor, with $25 million invested in Vidalia Denim. The Greater Nevada Credit Union of Reno, he said, is providing $5 million.

The $12 million Vidalia Denim paid for the facility, 74 acres and onsite water treatment facility has been deposited in the bank as of Friday, Craft said. The town will offer two-thirds of that money back to the company for infrastructure needs.

“There is $8 million of the $12 million that is being held in the trust,” Craft said. “If they meet certain criteria (within two years) that money will be invested back into the company. If not, then the town will absorb those funds.”

Other than cutting the grass around the facility, the town will not pay for any of the setup costs, Craft said.

As an industrial facility, Vidalia Denim will receive a discount on some expenses such as utilities, Craft said.

“There is an industrial rate that is less than the resident and commercial rate (for electricity). … Also, this company does not participate in the hydro royalty rebate.”

NATCHEZ — A whole lot of Lindas were at the Natchez Grand Hotel on Saturday — 65 Lindas to... read more