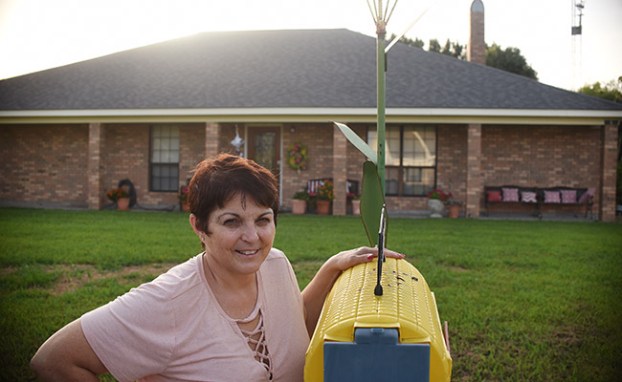 Phyllis Parker stands next to her corn-inspired mailbox on Carl Circle in Vidalia. (Nicole Hester / The Natchez Democrat)

VIDALIA — Phyllis Parker and her husband, Cecil, have been growing super sweet corn in Vidalia for more than 20 years.
But even sweeter than the corn itself, Phyllis Parker said, is the chance she gets every year to sell the corn to people in the community.

“It started out that we wanted to give our children a little job. We started planting a little bit when my son was 8 years old,” she said. “It just kind of grew from there. It grew and grew and grew. Now we market it out everywhere.”

When The Dart landed Friday at Parker’s residence on Carl Circle, she was watering her outdoor flowers, yet it is difficult not to notice her plant-based mailbox.

The tall corn stalk is an easy way to find the Parker household, Phyllis said, but if you want to buy corn, the time has passed.

“We have had our corn business (on Carter Street) for 21 years,” Parker said. “It usually goes the entire month of June. We’re all done this year.”

Parker said since her husband has a farming background — with a degree in agronomy from Louisiana Tech — he found the mailbox through some kind of agricultural advertisement.

“I don’t really remember how long we’ve had it, but I’m sure he just ordered it,” Parker said. “We’ve had it for a while.”

Parker said while she feels the mailbox has become part of her family’s identity she wouldn’t change anything and said she has not seen a more creative mailbox than her own.

“People usually just laugh about it,” she said with a smile. “People can always find your house when you tell them you have a corn mailbox.”

Parker admitted, too, her family eats a lot of corn. This year, Parker said her family harvested approximately 4,000 bushels of corn.

“We have two freezers full of corn,” she said. “We eat corn just about every day.”

Parker’s children are now grown as her son, Jarod Parker, recently turned 29 and her daughter, Callie Parker, is now 24.

Parker does have a 5-year-old granddaughter, Olivia, who she said she hopes one day will pick up on the family tradition.

“I told her next year I’m going to let her come pick corn with me and she told me she’d rather stay and play with the cows,” she said.

Natchez man arrested after being caught with gun from April burglary, then released on recognizance

NATCHEZ  — A Natchez man was arrested Sunday after he was caught with one of the firearms stolen in April... read more