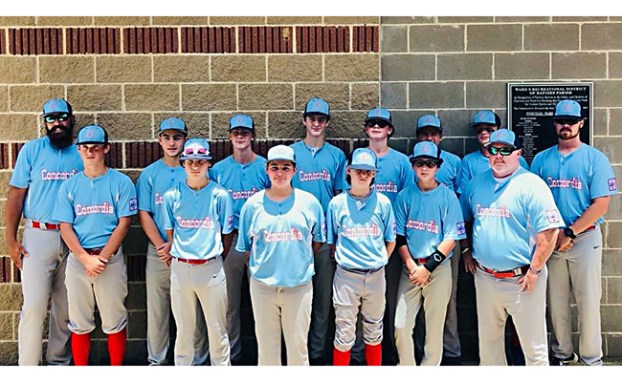 Gaining from a loss: Concordia 14U team falls short at state tourney in big way

For Daniel Grayson, his near 20 years of coaching all-star teams hasn’t always ended in the best way.

This year Grayson’s Concordia Dixie Youth 14U team fell one game short of a state title. However, the ending was nothing to sulk over, he said.

“I think this was the first time I’ve walked out the dugout after a loss and I got congratulated,” Grayson said. “They played their hearts out and I couldn’t ask for anything more.”

After winning its district championship, Concordia ended its season with a loss to JPRD East, 11-10, on Monday night in Pineville, Louisiana.

The miraculous part, Grayson said, was that his team trailed 8-0 after the first inning of its final game. They had also lost to JPRD East earlier in the state tournament, 16-0.

“Mentally we were ready to shut it down and we ended up dropping a ball in the first inning,” he said. “One dropped ball turned into eight runs in one inning.”

“I told them not to try to score all eight runs at one time — let’s just get two and chip away at it,” he said. “They bought into it.”

By the sixth inning, Concordia had tied the game at 10 runs apiece. Unfortunately, it gave up the winning run in the top of the seventh inning.

“I got kind of emotional at the end because they really are something special,” he said. “I really don’t look at this as a loss.”

Grayson also said he was proud of Kennedy, too.

“He’s young, so him spending time with them was great,” he said. “It was a blessing for him to work with them. It really helped us tremendously.”

If anything, both Grayson and Kennedy said everyone learned how not to quit.

“I can’t say anything more about how they played,” Grayson said.

Jake Spears started the game on the mound for Concordia and pitched one inning. Preston Higgins pitched the remainder of the loss.

Ethan Clark led the offense batting 4-for-5 with four RBIs. Preston Fuller also ended 4-for-5 with two RBIs. Xander Harveston finished with two hits and an RBI, while Luke Williamson, Jared Barron and Blake Grayson all batted in one run.

The Vidalia Little League Softball 16U all-star team is now just one win away from repeating as Senior League Southwestern... read more