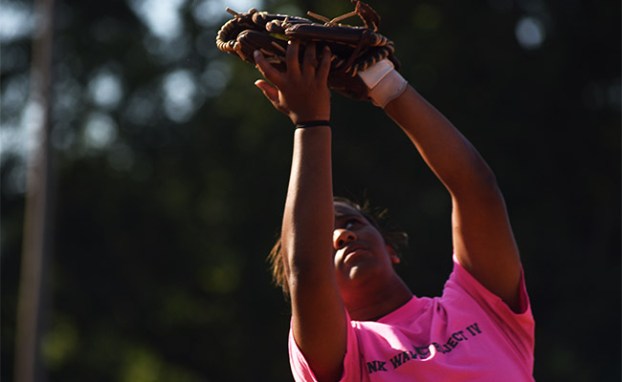 Cathedral School softball player Lauren Dunbar makes a catch near third base during practice Tuesday at the school. (Nicole Hester | The Natchez Democrat)

Let’s get it started: Cathedral returning a majority of players, hopes to capitalize

After learning the ropes coaching his first year of softball, Beesley said he’s ready to take this year head on.

“We had a lot of young players last year,” he said. “I think we’ve gotten a lot older and matured a lot since then.

“We will have a lot of kids who will be back playing with us.”

Though Beesley plans to lean on overall experience, he said he’ll have to do some moving around. The only two players that will remain in their starting positions will likely be sophomore Allie Feltus at third base and senior Baylee Graning at shortstop.

Cathedral’s previous starting catcher junior Fisher Iseminger will move to first base while Lauren Dunbar will take her place.

“We will work it around early in the year and let a lot of them play in different spots,” Beesley said. “By the time we get to district play I think we will settle in to one rotation.”

A fresh face on this year’s Cathedral squad will be former Trinity Episcopal School pitcher Addison Jackson, who will be an eighth grader.

“We are looking for good things from her,” Beesley said. “Hopefully she can step up as one of our main pitchers. She’s looked really good at practice.”

Additionally, joining Graning as a senior is Mia Gamberi and Adriana Rojo.

Coming along with the maturity, Beesley said he hopes the team improves all around.

“Our defense should be a lot better and I really think we are going to hit the ball much more than last year,” he said. “We kind of struggled at the plate.”

The Lady Wave will begin this season when it hosts Centreville Academy tonight — a chance to get off on the right foot, Beesley said.

“You always want to win district, that’s always your first goal as a team,” he said. “But these girls are excited just to get started.”

Tonight’s opener will begin with a junior varsity game at 5 p.m. with varsity following at 6:15 p.m.

Love is in the air: Vidalia 16U team falls in regional title game with heavy hearts

Leigh Anne Mason wouldn’t let her players leave the field Wednesday night until she wrapped her arms around each one.... read more