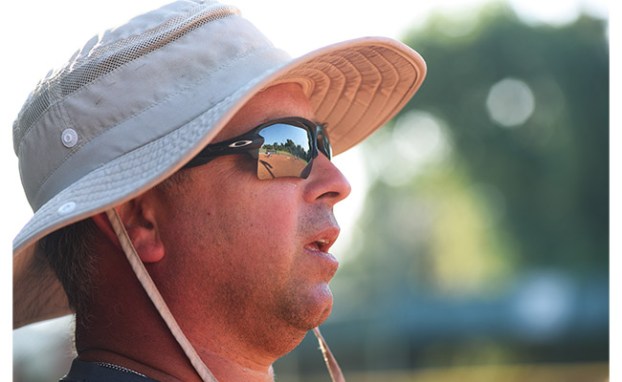 When Cathedral School athletic director Craig Beesley was left with an opening in the school’s head softball coaching spot late last summer, he took one for the team by stepping up and leading the team.

Now with his first year of coaching softball under his belt, Beesley said the experience is one he is happy to have had.

“Last year I didn’t know what was coming at me, but I feel a lot more confident going in to this year,” he said. “It was fun. I’m fired up and ready to go.”

With a background in coaching baseball for 25 years, Beesley has led the Green Wave to two state titles and more than 300 wins in his career. The main difference from softball, he said, is nothing.

“The game is the same,” Beesley said. “You still have to have someone on the mound who can throw strikes, and you have to be able to have timely hits. That’s no different from baseball.”

Though Beesley said last year’s softball season was a great way to learn, he said he never thought he would be in that position. The same goes for Monterey High School’s Eric Richard after assisting the Lady Wolves for the first time this past spring.

“That was the first girls team I had ever coached,” the 15-year baseball coach said. “It was eye-opening experience but a really good one.”

Richard said his transition was an easy one, but didn’t take away from the fact he was thrown into something very new.

“Never did I ever see myself coaching a girls sports,” he said. “It opened my eyes. It allowed me to step back, especially being an assistant.”

Luckily for him, Beesley also had been around the sport long enough to know the players and know the logistics of the game.

“Even though I had never coached it, I was at almost every home game being the athletic director,” he said. “It worked out because most of them knew kind of how I was thinking. I feel like I knew what to expect, and by the end of the year I thought we played pretty well.”

For Richard, he watched the Lady Wolves fall in the second round of the LHSAA Class B playoffs with a team that had no seniors and just one junior.

Both coaches said they are excited to see where the future of softball takes them.

“With everyone coming back, it’s just a matter how much better are we going to be,” Richard said. “We have the opportunity to take the next step. They have a good balance and are serious about getting the job done.

“The girls can be cut-throat. I saw that a lot this year. They have just as much or more competitive nature than the guys. If anyone thinks you’re taking a step down in competition from guys to girls, I learned this year that it’s not the case.”

Beesley said after a year of adjusting the practice schedule and sorting out terminology, everything seems to be fitting into place.

“I think this year is going to be a good year for us. I think my favorite part is just how much the girls enjoy being out here,” he said. “They never complain about it, and they are definitely learning what I expect out of them.

“This group of girls, I don’t look at them different than anyone else. The just understand what to do now.”

Beesley said, too, he can’t see giving up the job.

NATCHEZ — The moment Cathedral School’s Addison Jackson saw the perfect pitch, she took it and she ran — ran... read more