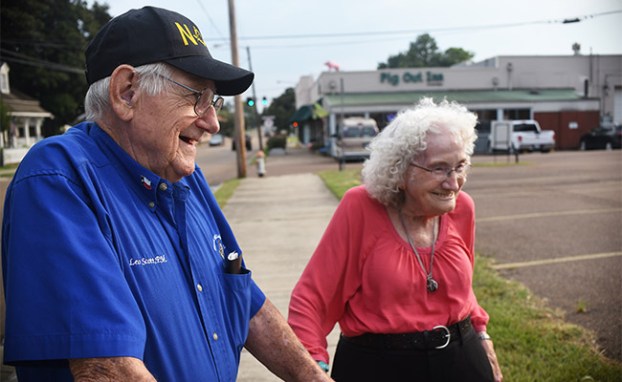 Leo and Sheila Scott from Houston, Texas, were visiting Natchez for the 200th anniversary of the founding of the Grand Lodge of Mississippi in Natchez. (Nicole Hester / The Natchez Democrat)

The Dart: Couple hunting for history in Natchez

NATCHEZ — Leo and Sheila Scott were walking along Canal Street back to their hotel from the Pig Out Inn when The Dart found them.

The couple who live 50 miles from Houston, Texas, were in Natchez for the 200th anniversary of the founding of the Grand Lodge of Mississippi in Natchez.

Leo said his favorite part of the event was the reenactment of the historic founding.

While the convention was the primary reason Leo was in Natchez, Sheila said she was primarily visiting to explore the oldest town on the Mississippi River.

“I was hunting for history,” Sheila said. “I definitely found history here.”

Sheila said she found the historical houses, plantations and the city in general fascinating.

When the two were not sightseeing or attending the Grand Lodge event, Leo and Sheila were cracking jokes with one another.

“I thought you were at the first meeting 200 years ago,” Sheila said, joking to Leo when he spoke of the Grand Lodge event.

“How old does that make you then, since you are older than me?” Leo said in response.

Sheila said the two tease each other consistently during their free time.

The couple of more than 50 years said being able to make and take jokes from one another is the key to their successful marriage.

“All we do is pick on each other,” Sheila said. “A sense of humor is always good. Being able to laugh at yourself and laugh at your loved one. I learned that when I was a child because I came from a family where if you did something dumb, yet funny, you have to tell them.”

Although Leo and Sheila were picking on each other on the way back to their hotel, they said they enjoyed their stay in Natchez and may return one day.

“It’s been a fun weekend,” Leo said. “It’s a long haul to here and will be a long haul back home. But, other than that, Natchez has been great. It’s a very nice city.”

Man out on bond, arrested again on drug-related charges Saturday

NATCHEZ — Local law enforcement officers arrested a Natchez resident for the second time in a little more than... read more